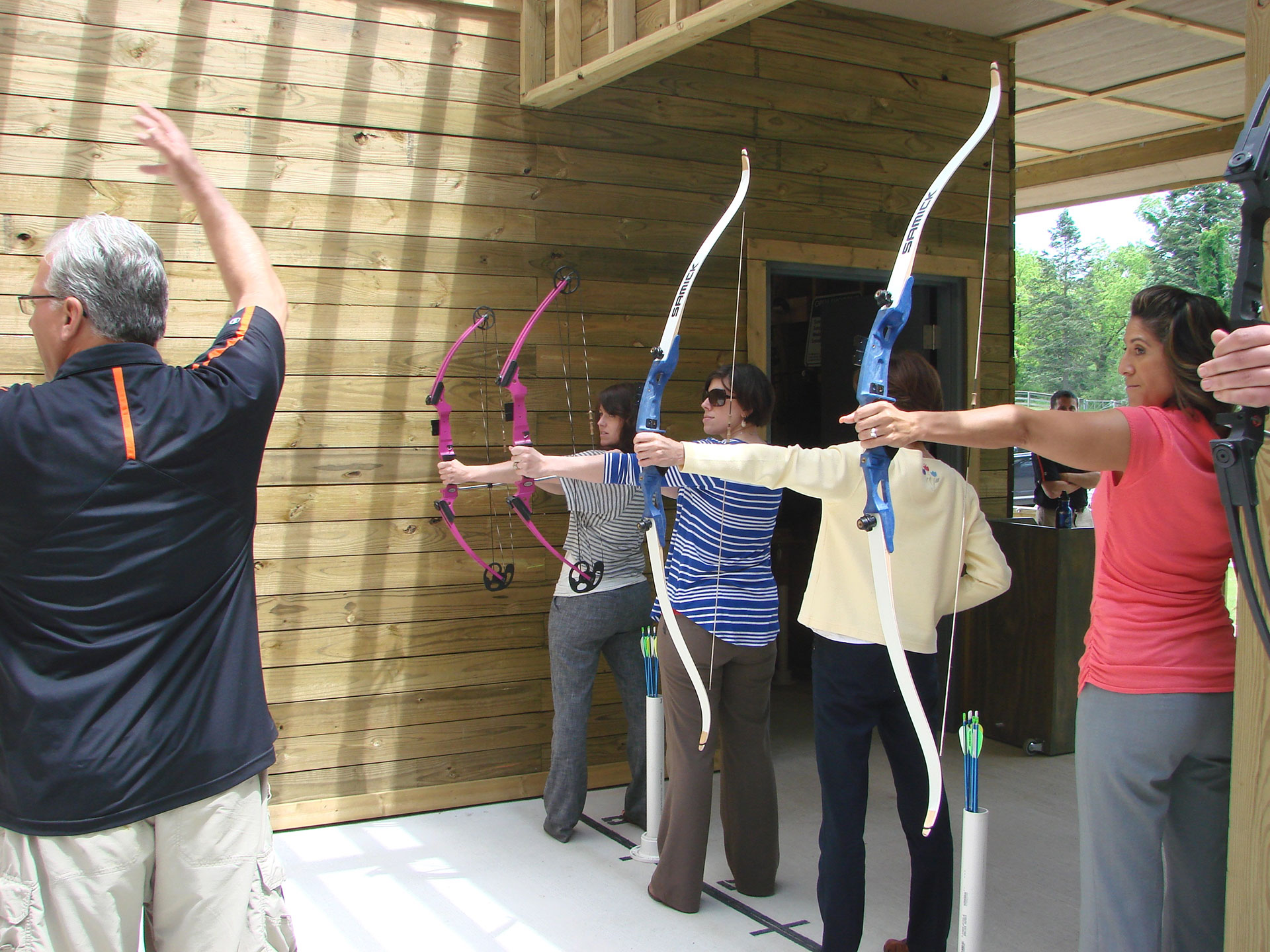 PINCKNEY – Twelve-year-old Mallory Farmer doesn’t think girls are better than boys in archery … she knows it.

“Girls are more patient and they are, like, just better at shooting,” said Mallory, a seventh-grader at Pathfinder School in Pinckney.

Mallory and her 10-year-old sister, Cassidy, love the sport so much they approached the Pinckney Community Schools last fall to start an after-school archery program at Navigator Upper Elementary School. They hoped 20 students might join them, but were shocked when more than 80 kids signed up.

Archery is booming in popularity nationwide, especially among girls and women.

Archery participation in the United States skyrocketed nearly 26 percent from 2012 to 2015, due in large part to movies such as “The Hunger Games” trilogy and Disney’s “Brave.” Today, there are an estimated 23.8 million archers nationwide, according to a new study commissioned by the Archery Trade Association.

“The Michigan Department of Natural Resources, conservation clubs, parks and recreation centers, and schools are doing their part every day to foster a love of the outdoors. It’s always a good time to get outside and experience all that Michigan offers – whether it’s archery, hiking, hunting or fishing,” said Matt Pedigo, chairman of the Michigan Wildlife Council, which is in the midst of a campaign to educate the public about the importance of conserving and managing our forests, waters and wildlife.

Hollywood played a huge role in archery’s popularity, but that growth couldn’t have happened without grassroots programs allowing people the chance to try the sport.

“This is due in part to the National Archery in the Schools Program introducing millions of kids to the fun of target archery in a school. Compound that with what USA Archery is doing with clubs around the country providing Explore Archery and [Junior Olympic Archery Development],” said Mark Copeland, vice chairman of the Archery Trade Association Board of Directors and store manager of Jay’s Sporting Goods in Gaylord.

“If we didn’t have these kinds of programs and ranges for people to try archery, it’d be like Detroit kicking out cars with no freeways to drive them on.”

Along with being a proud father of two outdoorsy girls, Bryan Farmer is deputy director of the City of Farmington Hills Special Services. Farmer was instrumental in bringing the new Riley Archery Range to fruition in Farmington Hills.

“As of 2013, we really had a demand for archery,” Farmer said. “Our camps and classes and after-school programs were packed and we had no place left for them to shoot. So we started exploring the idea of building our own range.”

Within the first year of its May 2015 opening, Farmington Hills had 5,660 people come out and shoot at its open-air community archery range. The facility offers programs and shooting opportunities for people of all ages and abilities, allowing both bows and crossbows.

After getting the Farmington Hills range off the ground, he volunteered to help his daughters get the Pinckney program up and running, too.

In Michigan, 620 schools have adopted the National Archery in the Schools Program, designed to introduce target archery in 4th through 12th grade physical education classes. The DNR offers 50/50 matching grants for equipment and free basic archery certification for teachers.

“Our goal with programs like Archery in the Schools, community archery, and Explore Bowhunting is to get our young people away from the computers and the cell phones and get them active,” said Kathy Garland, archery education coordinator for the Michigan DNR.

“Archery is an equal playing field among men and women, boys and girls,” said Mary Emmons, USA Archery outreach director. “It can be recreational or competitive, an individual or team sport. You can also compete as a family. And it’s ageless; you can shoot from eight years old to 70.”

“A lot of archery companies are making bows that are made to fit women and that’s had a big effect on more women getting into shooting,” he said.

Bennett also runs the archery programs at the MSU Demmer Center, a public shooting sports training facility with indoor/outdoor archer ranges, a 3D walking course, and indoor firearm ranges. The Demmer Center was built thanks to major financial donations from the Easton Foundation and the DNR, he said.

In addition to the MSU Archery Club, the facility serves as a training ground for a Junior Olympic program that attracts more than 160 area children. The Demmer Center’s instructors try to empower all their students – especially women and girls – to pursue archery in whatever way makes them happiest, he said.

The president of MSU’s Archery Club and this year’s National Outdoor Collegiate Champion Emily Bee said archery was a family affair when she was growing up near Hartland, Mich.

She and her younger brother, Chris, who’s also on MSU’s Archery Team, grew up bow hunting and shooting competitive archery.

“I really fell in love with the sport when I shot my very first tournament,” said Emily Bee, a 20-year-old junior. “Since then, I’ve competed at national and world events for the United States and Michigan State. I hold several junior, senior and collegiate titles. Although, when fall rolls around, I still manage to get out in the woods.”

“Archery and hunting teach you discipline and patience; two very important skills to have,” she said.

Bee said she believes women have the potential to shoot just as well as men.

And what would Bee tell young girls curious about archery after watching the Olympics earlier this month or seeing Katniss in “The Hunger Games?”

“Junior Olympic Archery Development is a great way for young girls to get involved and on the right track. Also, local pro shops can help set you up with the proper equipment and lessons,” she said.