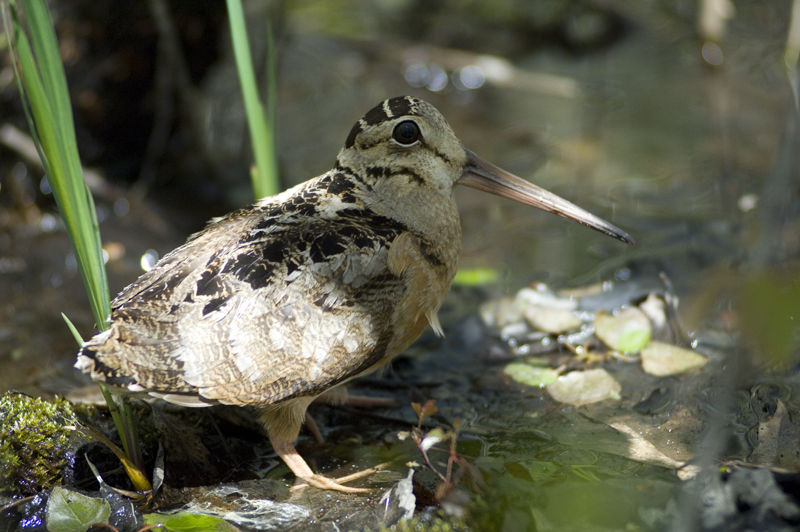 With nicknames like timberdoodle and bogsucker, you’d think it’d be hard to be taken seriously.

And yet hundreds of naturalists from around the world will converge on Michigan this fall to discuss ways to help conserve the tiny but important American woodcock.

The 11th Woodcock Symposium will take place Oct. 25-27 in Roscommon and is considered the preeminent North American conference on the conservation of this game bird.

“There’s been a lot of cutting-edge research on the migration of American woodcock in the last decade,” said Al Stewart, Michigan Department of Natural Resources upland game bird specialist. “By sharing that information and getting a better understanding of its needs, we can help conserve these birds for future generations.”

Wildlife biologists consider the woodcock to be an “umbrella species.”

“That means that by keeping an eye on woodcock, whose favorite habitat is brushy, young aspen forests, wildlife experts can also gauge the welfare of other birds, animals and insects that share that land,” said Matt Pedigo, chair of the Michigan Wildlife Council, which was created to raise the public’s understanding of the importance of wildlife management and its funding.

Some of the many species that benefit from creating and restoring young forest are snowshoe hare, bobcat, white-tailed deer, ruffed grouse, whip-poor-will, golden-winged warbler, willow flycatcher, indigo bunting, and the box turtle – as well as a wide range of insect and plant species.

Unique in appearance, woodcock have plump, round bodies with long, skinny, pointed bills. Woodcock use their bills, perfect for piercing through the soil, to find and eat worms and insects. Their buff bellies and black-and-tan, speckle-patterned feathers give them great camouflage.

In the past, woodcock were abundant because there was plenty of young forest. But as young forests matured and land was overtaken by urban development, woodcock populations began to decline.

Since the 1960s, a concerted, cooperative effort to restore woodcock habitat is turning the tide – and the Great Lakes State is playing a huge role in the little bird’s comeback.

“For decades, Michigan has helped gather information on woodcock populations, which spend time in numerous states and provinces from Canada to the Gulf (of Mexico),” Stewart said.

Michigan has banded about 38,000 of the needle-nosed game birds since 1981, which is more than anywhere else in the world, Stewart said.

Bird banding is the delicate process of placing a numbered ring around the leg of migratory birds in order to track their movement and habits. Banding is considered a useful wildlife management tool because birds are so mobile, crossing states, continents and even hemispheres during their annual migrations.

By tracking their movements through banding, scientists can better understand their breeding and wintering distribution, behavior, migratory routes and reproduction.

Many of those findings will be presented at the October symposium.

Of particular interest will be the data gathered from matchbox-sized satellite transmitters attached to the backs of woodcock.

“These studies showed when individual woodcock migrate and what route they take on their way to the Gulf of Mexico for the winter, ” said Andy Weik of the Ruffed Grouse Society/American Woodcock Society. “This tells us which areas are critical to the birds during migration and gives us the opportunity to improve that habitat to help the woodcock and its comeback.”

Michigan is one of the nation’s top nesting locations for woodcock.

That is due in large part to the joint efforts of public and private wildlife management organizations to create thousands of acres of young forest where woodcock can feed, rest during migration, mate and raise young.

International, national and state land managers along with private landowners have set up regional habitat initiatives in different parts of the woodcock’s range. The partners work together to create healthy, productive tracts of young forest through timber harvesting, planting native shrubs and trees, controlled burning and other techniques that help woodcock and many other birds, mammals, reptiles and insects.

As with many other conservation programs in Michigan, the protection of wildlife and their habitat is funded primarily by the purchase of hunting and fishing licenses.

“Additionally, through the Federal Aid in Wildlife Restoration Act – also known as the Pittman-Robertson Act of 1937 – sportsmen and sportswomen nationwide have generated billions of dollars through the purchase of their hunting and fishing equipment,” said Jeff Poet of the Michigan Wildlife Council. “These are dollars that are used to conserve critical wildlife habitat for all of us to enjoy.”

In 2016, Michigan received over $22 million of those Pittman-Robertson funds from the U.S. Fish and Wildlife Service for restoration of wild birds and mammals and to acquire, develop and manage their habitats.

Similar to other game species, the American woodcock has been and continues to be successfully managed through carefully regulated hunting seasons in addition to habitat conservation projects. Along with the DNR, hunter-established volunteer conservation organizations have assumed responsibility for the management of wildlife, often leading the way for species restoration efforts.

“The reason Michigan is No. 1 for American woodcock harvest is we spend a lot of effort maintaining young forest in the state and providing excellent places for woodcock to live and nest,” Stewart said.