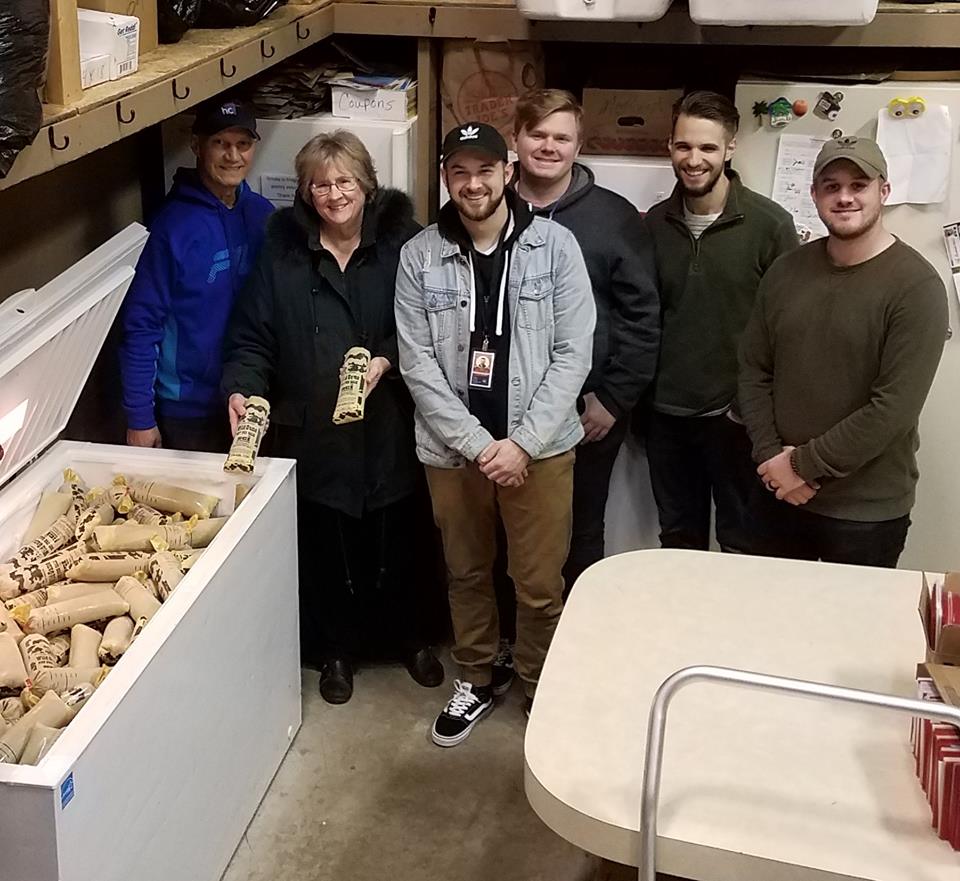 On Saturdays, Sterling Heights resident Marilyn Rimkus passes out food to needy families at Heritage Church near her home. The 71-year-old retiree arrives around 9 a.m. to help set up, spends about two and a half hours serving the people who come, then leaves a little before noon, after she finishes cleaning up. But for Rimkus, it’s more than just a way to spend her free time paying it forward.

You see, Rimkus isn’t just a volunteer – she also depends on the food that she receives from the pantry. She said living on a fixed income makes it difficult to eat healthfully while still making ends meet, but thanks to food pantries in Metro Detroit, she’s been able to maintain a nutritious diet. That includes incorporating a type of protein into her meals that she said she never would have previously considered.

“I’ve become a big fan of the venison that’s offered here,” she said. “My sons were both deer hunters, but I never tried it before. I don’t know why; I guess I just had something in my head against it. But now I really like it. I use it in everything – chili, spaghetti, sloppy joes. It’s great meat.”

The venison that Rimkus and other food pantry customers use is provided by Michigan Sportsmen Against Hunger, a nonprofit program that allows hunters to donate the white-tailed deer they collect during hunting season to underprivileged Michigan families and individuals. All venison is ground into hamburger by local wild game processors, who receive a stipend for every pound of meat they create from the deer. That meat is then frozen in tubes and distributed well past the end of hunting season into these warm spring and summer months.

“It doesn’t cost the hunter anything, and we try to cover as much of the processing costs as we can,” said Dean Hall, president of Michigan Sportsmen Against Hunger. “It’s an efficient use of resources toward one of the most worthwhile causes you can contribute to. There’s still so much food insufficiency in the state right now.”

Since 1991, Michigan Sportsmen Against Hunger has been working to connect donors, processors and food pantries. The program is 100 percent volunteer-driven, led by sportsmen and sportswomen who harvest deer both during regular hunting season and during special off-season cull efforts, which occur when deer become a nuisance to farms or neighborhoods. These management practices help the deer by keeping their populations healthy, and benefit people by helping to fight local hunger. This year the organization has already donated 34,000 pounds of venison to pantries – roughly enough for 136,000 meals – which is almost 15 percent more than was distributed in all of 2017.

“Word is getting out, and the program is picking up steam, so we have a lot to be thankful for,” Hall said. “We’re still trying to get more processors in as part of the program – we only have 37 who participate, out of more than 700 in the state. But thanks to the hunters who contribute, there’s no shortage of venison coming in, and that’s great for people who rely on food pantries.”

Of course, deer season is licensed and highly regulated by the Michigan Department of Natural Resources, one of the sponsors of Michigan Sportsmen Against Hunger. And those regulations are in place to guarantee that Michigan’s deer herds will continue to thrive, with hunters being a key part of state conservation efforts.

“Deer, like all wildlife, need to be managed to be kept healthy,” said Matt Pedigo, chair of the Michigan Wildlife Council. “Deer have a profound effect on their environment, through their movement, their diet and the predators they sustain. Keeping their populations strong means that we have more diverse, robust forest ecosystems. And in Michigan, we depend on hunters to be part of the equation.”

The Michigan Wildlife Council is dedicated to increasing public understanding of the important role wildlife management plays in conservation of the state’s natural resources. That includes sharing how the state’s strict hunting guidelines keep species like deer in equilibrium with their habitats. And the fact that natural resource management in Michigan is primarily funded through hunting and fishing license dollars and not by state taxes ensures that the state’s wildlife will be here for future generations, providing a valuable food source both for hunters’ own families and for families in need.

“Michigan Sportsmen Against Hunger is a great example of how hunting benefits all parts of society,” Pedigo said. “This work is bringing real, meaningful improvements to the lives of people and to the Michigan environment.”

In addition to the DNR, Michigan Sportsmen Against Hunger is sponsored by the Food Bank Council of Michigan, Michigan United Conservation Clubs, Michigan Bow Hunters Association, and several other hunting-related organizations. People who buy hunting and fishing licenses can voluntarily contribute money toward the program at the time of purchase, and non-hunters can donate $1 through DNR-licensed vendors, such as Meijer and Great Lakes Ace Hardware locations.

“We also have people, mostly non-hunters, who find out about us and send us donations through the mail,” Hall said. “We got this one letter from a little girl named Lily, who sent us her own money after her dad told her about us. She said she thought we were a great charity and to keep up the good work. It was really overwhelming.”

And with the expectation that the percentage of Metro Detroiters living on a fixed income will continue to increase in coming years as more Baby Boomers reach retirement age – and because there are always other families facing hunger issues – the program will continue to be a valuable resource for 35 Metro Detroit food pantries and churches that distribute food, such as Heritage Church in Sterling Heights. So don’t be surprised if you see venison popping up in more of your friends’ and families’ dishes.

“This is premium, lean, organic meat and I’m glad I was introduced to it,” Rimkus said. “I wish the stuff I bought at the store was this good. A lot of small families in the area are still having a rough time of it. We’re lucky to have this program.”

Hunters who want to donate their deer can find a participating processor by calling (586) 552-6517 or by visiting the Michigan Sportsmen Against Hunger website. Non-hunters can also contribute by making a tax-deductible contribution online or by sending a check to P.O. Box 5127, Warren, MI 48090.