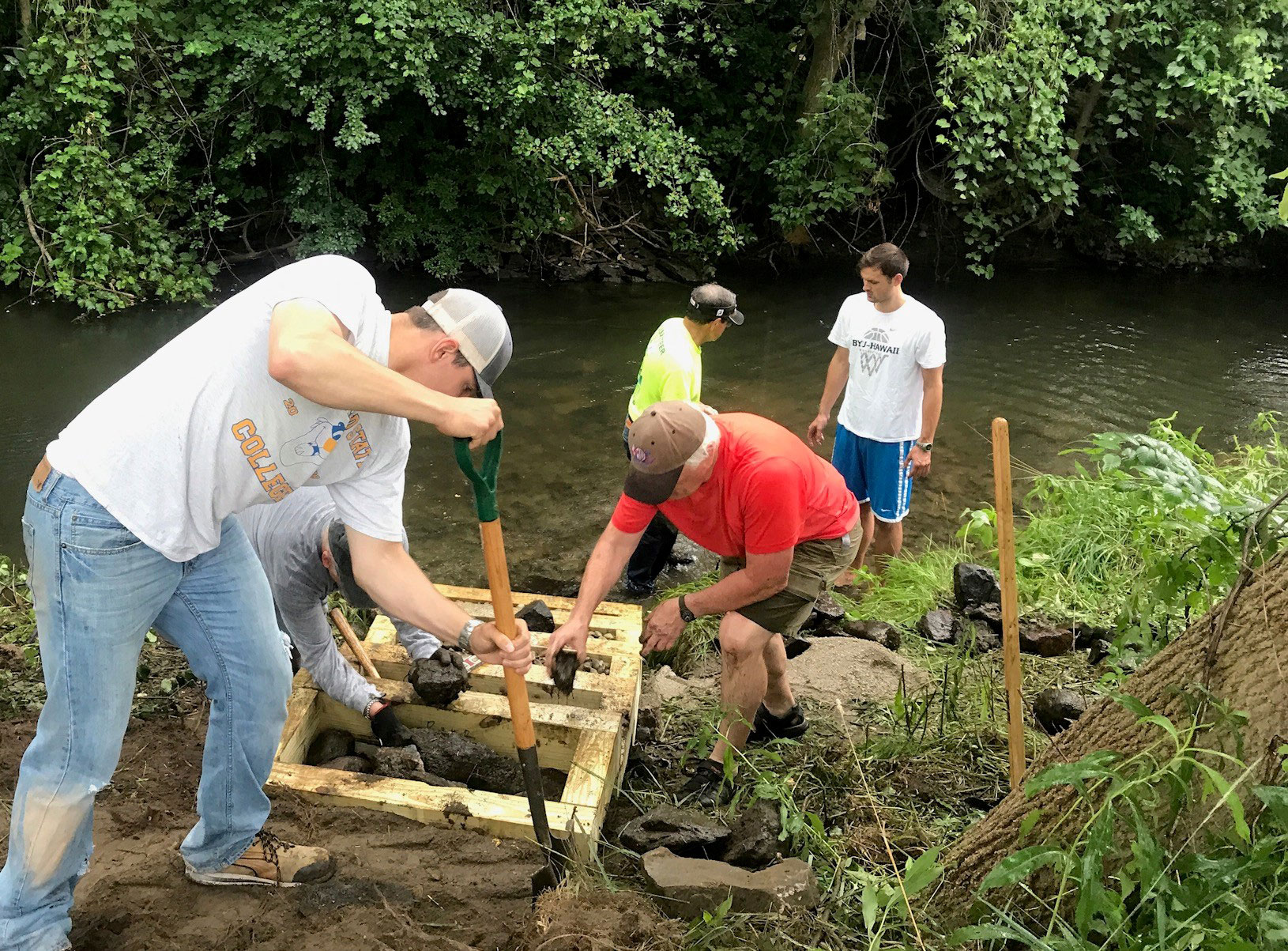 Clean, free-flowing rivers rank among the most treasured of places that say “Michigan” to us. But without proper management and care, these resources can be lost in a very short time. Continual conservation projects maintain and often restore water quality and fish habitat, while also improving the beauty of areas that may have been neglected or damaged.

In many instances, this work is done not only by the Michigan Department of Natural Resources but also by volunteers from nonprofit conservation organizations, including those whose membership includes hunters and anglers.

One of those organizations is Trout Unlimited (TU), which has about 300,000 members nationwide. There are about 8,000 TU members in Michigan, all of whom belong to local chapters. Jeff Gerwitz, president of the Vanguard Chapter, located in Rochester, explains why TU members do this kind of work. “Trout Unlimited is first and foremost a conservation organization dedicated to conserve, protect and restore Michigan’s coldwater fisheries and their watersheds. But a very large percentage of our members also love to fish. Our love of the outdoors leads us to participate in these conservation efforts.”

Recently, the Vanguard Chapter completed two conservation projects on northern Oakland County’s Paint Creek. Paint Creek Trail, Michigan’s first nonmotorized rail-to-trail, runs for 8.9 miles along and near the creek that it’s named after. More than 100,000 visitors enjoy the trail each year, whether they’re biking, walking or watching the area’s beautiful birds and butterflies. In several places, the trail crosses Paint Creek, allowing access to the water.

Some of those access points are paths where frequent use loosens the soil, which then erodes and washes into the creek. That soil clouds the water and eventually can cause serious harm to the fish and insects that live there. For those reasons, erosion sites are often among the most important conservation projects on a stream.

We’re all in this together

Though much of the conservation and restoration work done in Michigan is conducted by the state, many smaller projects are voluntarily taken on by hunting and fishing organizations like TU. Those volunteers contribute to the state’s conservation efforts in several ways, including buying hunting or fishing licenses.

“There’s a common misperception that the funds used for wildlife management and conservation work in Michigan come from state taxes, but that’s not the case,” said Matt Pedigo, chair of the Michigan Wildlife Council. “The funding for the work actually comes from every hunting and fishing license sold in the state.”

TU chapters plan and organize projects, and provide the on-the-ground labor needed to get the work done. All of these efforts continue year-round.

“It always amazes me to see the passion in the fishing community, whether it be taking down destructive beaver dams, volunteering for river cleanup days or even just supporting the resource by purchasing a license,” said Matt Cullen, president of metro Detroit’s Paul H. Young TU chapter.

In all, Michigan’s anglers and hunters make the outdoors even more enjoyable for everyone. In some cases, that increased enjoyment comes from a conservation project that creates easier access to a lovely, relaxing place. That’s exactly what the Vanguard Chapter of TU did when it installed a stairway at a badly eroding, steep access site near the Gallagher Road Bridge on Paint Creek.

Steps that benefit all nature lovers

The planning for the stairway project began under the leadership of Eli Stanesa, the chapter’s Conservation Committee chair. After receiving approval for the project from the Paint Creek Trailways Commission, the chapter submitted a request for conservation funds to the Michigan Fly Fishing Club and was granted $800 for the project.

After about 100 hours of volunteer labor, the project was done.

In addition to the stairway project, three Vanguard Chapter members devoted another Saturday to helping install more than 150 additional native plants at several other sites on Paint Creek, working with crews from the Clinton River Watershed Council and members of the Clinton Valley Chapter of TU.

The first location was at Kern and Clarkston roads, where large graffiti-covered slabs of concrete – the remnants of the Rudds Mill Dam – had been removed through a partnership that included the Michigan Department of Environmental Quality and the DNR. After more than 100 years, Paint Creek could once again flow naturally. The second location was just north of Silverbell Road, and the third was at Ludlow Road in the city of Rochester.

In the coming year, the Vanguard Chapter will continue with yet more projects on Paint Creek.

What motivates the volunteers to continue working to maintain and improve resources? Cullen provides a good answer. “The fishermen I know love our resources as much as anyone, and they give their time and money to keep those places pristine and full of healthy wildlife. Clean, clear rivers and beautiful, well-managed forests and wetlands make great homes for all types of animals. Everyone can enjoy viewing the wildlife that benefits from conservation.”