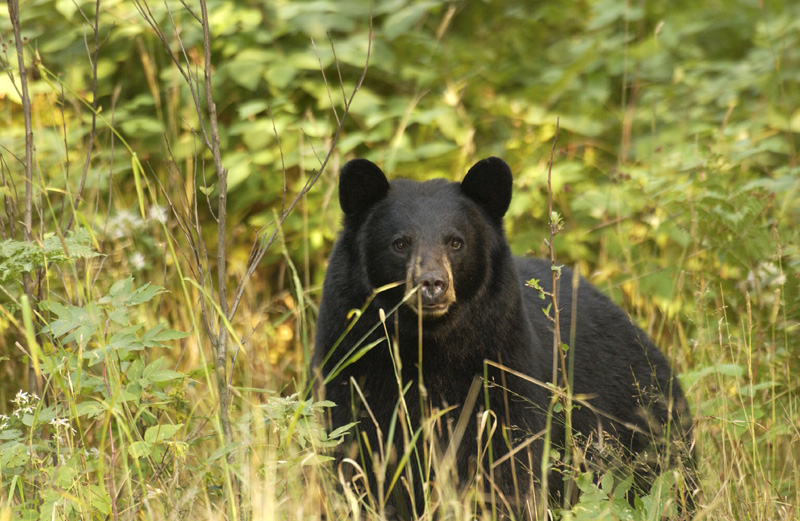 Even if you’ve lived in Michigan your entire life, chances are you’ve never come across a black bear in the wild. Despite their apparent elusiveness, though, black bears are impressively widespread across North America. So how come you’ve probably never seen one? Easy – bears don’t want to be seen.

“A black bear can be nearby, and you wouldn’t even know it,” said Katie Keen, wildlife communication coordinator for the Michigan Department of Natural Resources. “They’re very cautious. People think of bear as being these big, aggressive animals, but an average black bear only stands about 3 feet tall. They would much rather try to avoid people.”

However, black bears can still pose a threat to humans. They’re omnivorous, feeding on plants, nuts, berries and insects, supplemented by scavenging. They are extremely powerful animals, and the sharp claws they use for digging through packed dirt and the strong jaws they use for chewing through foliage can just as easily be used for defense if they feel threatened.

Black bears are native to Michigan, and their population in the state has been steadily increasing since the 1990s, with current estimated numbers of adults at over 12,000. They can make just about any part of the state their home, with a range that encompasses the entire Upper Peninsula and the northern half of the Lower Peninsula. Keen said the only limitation to their range is how near humans let them get to their communities.

“Black bear have an incredible sense of smell, and they can be easily attracted by trash cans, barbecue grills and backyard bird feeders that humans leave out,” Keen said. “Bear-human interactions are rare, but they can be dangerous if a person isn’t careful. That’s one of the reasons black bear are managed through regulated hunting in Michigan, so we can control where and how many there are.”

According to the U.S. Fish and Wildlife Service, black bears are second only to white-tailed deer in the number of hunters who pursue them each year in North America. While bear hunting in Michigan is a tradition that stretches back just as far as deer hunting, Keen said she still frequently hears from people who don’t know about it, or who think it’s unethical or against the law.

Most Michigan residents – up to 91% in some parts of the state – support regulated hunting as a means of managing bear populations in their area. Keen said incredibly tight restrictions are set on how and when a bear can be harvested, and the limits are tweaked every few years based on scientific research to ensure Michigan’s bear population remains robust and healthy. The checks and balances are in place to ensure black bear will always have a home here in Michigan.

“Bear hunts let us keep tabs on their numbers, because every bear that’s harvested needs to be taken to a registration station where we glean all types of data,” Keen said. “That information is then used to develop models on how bears are moving around the state, what they’re eating and information on their breeding habits.”

“Money for wildlife management in Michigan is provided by hunting and fishing licenses, not state taxes,” said Matt Pedigo, chair of the Michigan Wildlife Council. “Annual hunts for a wide range of species, including black bear, help all Michigan wildlife, which is an important distinction to make. We’re dedicated to increasing public awareness about wildlife and wildlife conservation efforts, and that work benefits Michigan’s wildlife across the board.”

Michigan also has a Black Bear Management Plan, which uses science-based methods to maintain a sustainable bear population and minimize bear-related conflicts. The plan anticipates that bear will continue to expand their range southward into more populated areas of Michigan, even as residents from urban areas will continue to move into areas traditionally occupied by bears to the north, setting up the possibility for increased human-bear interactions in coming years.

Keen said that regulated hunting is the most effective management tool for black bear, and by taking the proper steps, people can avoid unnecessary conflict with this native species. She also had some suggestions.

“You should never intentionally feed a black bear – they are wild animals that are unpredictable and should be respected,” she said. “You can also take steps such as removing bird feeders from your property, keeping trash bins and barbecue grills inside sheds or garages and if you have beehives, putting electric barriers around them. A lot of these are common sense, but they add up to a much more peaceful coexistence.”

Even though black bears only occasionally travel south of Mount Pleasant, Pedigo said he thinks the gratification of having them in Michigan runs statewide. And that’s a feeling the Michigan Wildlife Council wants to help preserve.

“We want to make sure that wild black bears will thrive in Michigan for generations to come,” Pedigo said. “They’re one of the coolest animals that live in the state, and it’s a source of pride that they’ll always have a place to call home here. Even if you don’t get to see one, just knowing that they’re there – and will always be there – is a good feeling.”