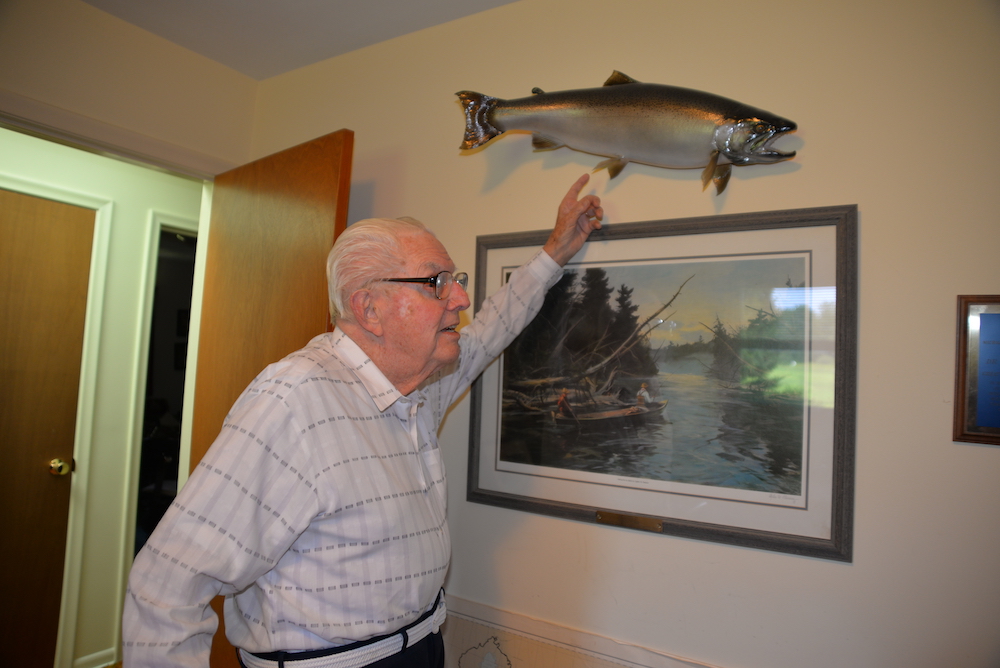 When it comes to recreational fishing in Michigan, Howard Tanner literally wrote the book on it.

In 2018, the 95-year-old retired conservationist published his first book, “Something Spectacular: My Great Lakes Salmon Story,” which recounts his successful effort to revitalize the Great Lakes by introducing salmon — and, by extension, an entire new industry — to Michigan.

“When I came up with the idea, I didn’t know if it would even pass the approval process,” Tanner said from his home in Haslett, a suburb of Lansing. “I was confident it would work, but introducing a species to a new environment, especially one as big as the Great Lakes, was pretty controversial at the time. But time has proven it was the right call.”

Today, the Great Lakes provide unique fishing opportunities for Chinook, coho, Atlantic and pink salmon, attracting anglers from around the world to Michigan. In fact, salmon fishing contributes an estimated $2.5 billion in recreational angling expenditures to the Great Lakes states and about $7.1 billion in retail economic output annually.

Additionally, because of overpopulation, alewives, a type of prey fish, were washing up dead on Great Lakes shorelines by the ton, making Michigan beaches places to be avoided at all costs. Conservationists struggled to find a solution.

Tanner, a native of Michigan, graduated from Michigan State College (what became Michigan State University) and headed to Colorado in 1952 to work for Colorado Parks and Wildlife. Twelve years later the Michigan Department of Conservation lured him back to his home state for the Fish Division position — and he brought unique insight to his new job.

“I had seen how salmon in Colorado kept the natural systems in balance, and that’s what the Great Lakes needed,” Tanner said. “It was just a matter of seeing if it could work.”

His idea not only worked but has since been called one of the most successful fisheries projects in the world. When Tanner was inducted into the American Fisheries Society’s Hall of Excellence in 2008, the executive committee said his contributions were “perhaps the largest biomanipulation program involving propagated fish in the history of the North American aquaculture.”

His dedication in the Hall of Excellence reads, in part: “The contributions of Dr. Howard A. Tanner that ultimately shaped the Great Lakes stocking program will never be forgotten by the fisheries management community.”

The success of the salmon introduction reinvigorated coastal cities around Michigan. Charter boat fleets, marinas and tourist-friendly beachfront communities replaced the industries that had taken over many of those cities.

“The success of the salmon fishery was one of the fires that lit on all of our port communities to transform themselves into the resort areas they are today,” said Jim Dexter, Fisheries Division chief for the Michigan Department of Natural Resources. “It really became one of the foundations that helped turn Michigan around.”

Conservation gets a boost

It also fueled conservation work through dollars coming in from all the fishing licenses being sold.

“Wildlife management in Michigan wouldn’t be as successful today if we didn’t have salmon,” Dexter said. “And it’s not just one and done. Wildlife management is like working on a house. You’re always making sure the existing systems are working well through constant maintenance. And you can’t do that without license dollars.”

‘Geography has given us an assignment’

Shortly after the release of “Something Spectacular,” Tanner embarked on a statewide book signing tour, which included several speaking engagements. The book has sold a modest 500 copies, but Tanner said he wasn’t expecting it to make any bestseller lists.

“My main goal with this book is to show the people of Michigan that we are the principal guardians of the Great Lakes,” he said. “Geography has given us an assignment. We live here, and we need to take care of it.”