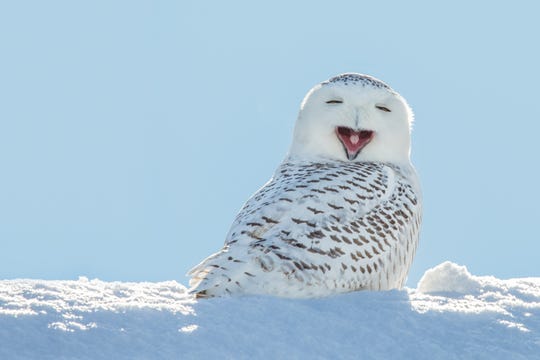 They’re large, fluffy and white, and they’re about to descend on Michigan.

Like other migrating birds, snowy owls head to more temperate climes during the winter. But their definition of “temperate” differs from that of birds that spend summers in Michigan and travel south during cold-weather months.

“Snowy owls think Michigan is nice and warm and balmy in the winter compared with the Arctic, where they spend the rest of the year,” said Erin Rowan, MI Birds program associate, a joint position with Audubon Great Lakes and the Michigan Department of Natural Resources. “That polar vortex that affected the state for a spell last winter is what they’re leaving.”

Indeed, Michigan’s winters are generally comparable to what snowy owls experience in the Arctic during the spring, summer and fall.

And that similarity is a good thing for Michigan bird-watchers, especially during irruptions that bring an unusually large influx of snowy owls into the state, said Elliot Nelson, Michigan Sea Grant educator in the Chippewa County extension office at Lake Superior State University in Sault Ste. Marie.

“Any sighting can be quite exciting because they’re not something you see every day,” he said. “They’re a stunning bird because they’re stark white and have piercing yellow eyes.”

Rowan describes them as “pretty much big fluff balls.” They stand about 28 inches tall and have a wingspan of nearly 5 feet. At a maximum of just over 6 pounds, they’re the heaviest North American owl.

“They are definitely considered the most beautiful and sought-after owl in the state,” Rowan said, adding that out-of-state birders travel to Michigan in hopes of sighting them.

Michiganders who haven’t had the good fortune of spotting snowy owls in the wild might recognize them from the “Harry Potter” film series. Hedwig, Harry’s pet owl, was of the snowy variety.

Despite that high-profile role, much about snowy owls remains a mystery, including exactly how many of the birds are expected to come to Michigan each year.

For one thing, snowy owls are unpredictably nomadic, Nelson said. Just because a bird spent one winter in Michigan doesn’t necessarily mean it will return here the next season.

Also, the number of snowy owls that arrive in Michigan is largely dependent on conditions they faced in the Arctic earlier in the year, Rowan said. If it was a good breeding season with plenty of their favorite food, lemmings, to feed on — leading to a higher survival rate of fledglings — there is a greater chance of an irruption in Michigan.

That’s what occurred in 2017, when snowy owls converged on the state. Some stayed well into summer, including one that perched atop the Wyandotte Police Department building and another that made the St. Clair Flats State Wildlife Area its home.

“We were very surprised, and a lot of people were concerned and keeping an eye on them to ensure they didn’t become heat-stressed and were getting enough food,” Rowan said.

Typically, however, snowy owls begin to show up in Michigan in December and are gone by March, Nelson said.

The first sightings, naturally, usually occur in the Upper Peninsula, since that’s the first spot they hit in Michigan during their journey south. The eastern Upper Peninsula in particular has everything snowy owls are looking for: wide-open spaces and plenty of rodents and other small animals to eat, he said.

While snowy owls reliably roost in the eastern Upper Peninsula most winters, Nelson said, their Lower Peninsula presence is sporadic.

“Some years, you won’t find any at all downstate,” he said.

But over the years, snowy owls have been spotted in every region of Michigan, according to eBird, a Cornell Lab of Ornithology project that collects data from bird-watchers.

Beyond the Upper Peninsula, common hot spots in Michigan include the Saginaw Bay region and the Lake Michigan coastline, Rowan said.

Out in the open

If snowy owls are in the vicinity, they’re relatively easy to find, Rowan said. They typically hang around fields, meadows, airports or other open areas — even landfills. While they primarily hunt from the ground, they also like to perch on fence posts, barns and similar structures while surveying their surroundings for prey.

Also, the owls are active during the day, not just nocturnally, like many owl species, improving the chances of sightings.

And because they’ve generally had little human interaction while dwelling mostly in the Arctic, they haven’t learned to fear people and don’t always immediately fly away when someone is nearby.

“With that said, we urge people to maintain a respectful distance when observing snowy owls, or all wildlife for that matter,” Rowan said.

Although snowy owls are occasionally found in groupings as they prepare to return north, they’re usually territorial birds that prefer at least a square mile of space to themselves, Nelson said.

Estimating snowy owl populations is tricky, given their nomadic lifestyle, wide range and remote Arctic habitat, he said. Scientists had long believed there were at least 200,000 worldwide, although recent research pegs the number at around only 14,000 breeding pairs.

In 2017, the International Union for Conservation of Nature listed snowy owls as vulnerable — one step short of endangered.

Climate change is considered a primary threat to snowy owls, because changes to snowmelt and snow cover can affect the availability and distribution of prey, Nelson said.

The owls are protected under the U.S. Migratory Bird Treaty Act, meaning they can’t be hunted, but poaching remains a problem, as does capture and harassment, he said.

Other human-related threats include collisions with power lines and automobiles, as well as poisoning due to eating rodents that have eaten poison set out by homeowners.

Rowan urges anyone who discovers a snowy owl in distress to contact a nearby wildlife rehabilitator. The Michigan Department of Natural Resources maintains a list of licensed rehabilitators throughout the state.

“That’s one thing that makes Michigan such a great state for outdoor lovers: There are so many people who work to ensure that our wildlife and other resources will be here for future generations to enjoy,” said Matt Pedigo, chairman of the Michigan Wildlife Council.