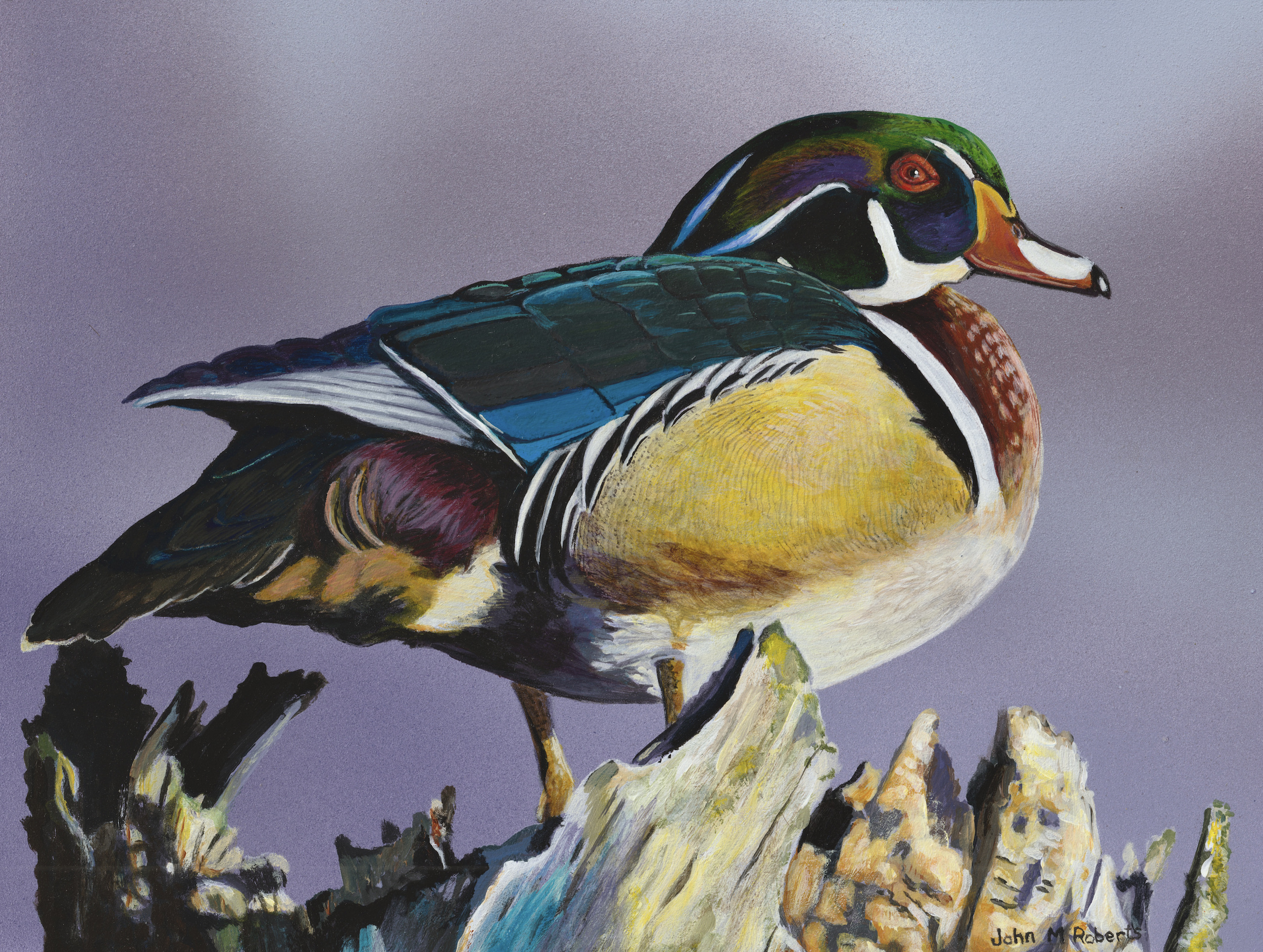 Behold the 2021 Michigan duck stamp, a colorful piece of wildlife art that was evoking positive reactions even before it went on sale to the public.

For Marsha Standler, who coordinates the duck stamp program on behalf of the Michigan Duck Hunters Association (MDHA), it means more funding for conservation programs that help the state’s waterfowl.

To John Roberts, the Saginaw Township wildlife artist who created the piece featuring a wood duck standing on a stump, it represents a career boost.

For collector Andy Gorske, the stamp is another cool piece of art to hang in his Pinconning house.

And for Nick Buggia, it’s an example of how the outdoors can bring people together.

“It’s one of those Michigan traditions that help residents rally around the state’s outdoor heritage, whether they hunt or not,” said Buggia, chair of the Michigan Wildlife Council, which was created by the Michigan Legislature in 2013 to educate the public about the importance of wildlife conservation.

“I never realized how many people collect stamps,” she said. “It’s amazing. A lot of them aren’t even waterfowl hunters.”

Gorske is one regular purchaser who does hunt.

“I’ve been a duck hunter forever, and I like the duck stamps — they’re kind of neat,” he said.

Gorske, part of the third generation of the family that runs the Frank’s Great Outdoors sporting goods store in Linwood, north of Bay City, has more than 20 framed 11-by-13-inch prints of Michigan duck stamps hanging in his home.

“I always get one as soon as they come out,” he said. “I enjoy them, and I know that I’m supporting conservation.”

Making their mark on conservation

This year’s edition will become available for purchase by late spring, and order information is available on the Michigan Department of Natural Resources’ website. The cost is $6 for a 2-by-3-inch nonadhesive stamp. Waterfowl hunters can get one at no cost if they mail a copy of their license along with a self-addressed stamped envelope to Standler.

“I send quite a few of them out,” she said. “I don’t know if they would buy one otherwise, but people like getting something for free.”

The list price for a print is $145, but those who pay $25 for an MDHA membership can buy one for $45 — the money-saving option that most people choose, Standler said.

Ten percent of the proceeds benefit DNR programs for purchasing, restoring and enhancing wetlands, with the remainder supporting MDHA conservation initiatives. The association, a nonprofit dedicated to waterfowl and wetland conservation, will fund or undertake projects such as clearing brush or installing wood duck boxes to create nesting areas.

“A lot of what we do supports or supplements the conservation work that takes place at state game areas,” Standler said. “But we also like to think that it benefits the entire state and everyone who loves seeing birds thriving in the wild.”

The MDHA has managed the duck stamp program since 1998 on behalf of the DNR, which had administered it until then after it was established in 1976.

In touch with the outdoors

Michigan duck stamp purchases are voluntary and are separate from the federal migratory bird hunting and conservation stamp — also known as the federal duck stamp — which every waterfowl hunter must buy for $25 when getting a Michigan waterfowl license.

“But both stamps serve the same purpose — to generate enthusiasm and support for bird habitat preservation,” Buggia said.

Besides Michigan, about 25 other states issue annual duck stamps, either purely as collector’s items or as required add-ons to license purchases. And like Michigan, many of the states stage contests open to artists nationwide to determine the design of each year’s stamp.

Roberts had been entering contests for about 10 years, finishing as high as third in Nevada before breaking through with his first-place finish in Michigan’s recent competition. He beat out more than 20 other entrants to win the $2,000 grand prize.

“My reaction was to kind of go into shock,” he said of hearing the news. “I was very excited, but at the same time it was a really gratifying, humbling experience.”

It was also ideal timing, since Roberts just in the last year decided to pursue art full time, and he figures the win will raise his profile. During the previous couple of decades, painting was a sideline gig while he worked as a firefighter and in construction. He had dabbled in art since he was a teen, typically focusing on wildlife and almost always on waterfowl.

“Waterfowl have always been my niche because I’ve always had a fondness for the beauty of the feathers,” he said. “I’m really drawn to the iridescence, and they come in such a wide variety.”

His winning Michigan duck stamp entry was based on a picture a photographer friend took at the Crow Island State Game Area in Saginaw County, which, like all state game areas, relies on revenue from hunting and fishing license sales to operate.

“She gave me the rights to it, and I changed a couple of things,” Roberts said. “I felt really good about it, better than I have about any other duck stamp entry that I had done before.”

But he’s always felt good about being outdoors. One set of grandparents had a cabin in Kawkawlin, and the other had a place on the Little Manistee River near Baldwin. “We grew up in the outdoors,” Roberts said.

And his life continues to revolve around it, through painting, hunting and simply basking in the outdoors.

“I spend as much time in the spring taking pictures of the waterfowl as I do hunting them in the fall,” he said.

“I always find that painting and the outdoors have something synonymous, that time kind of evaporates before you. Before you know it, four hours are gone and you think, ‘I just had a wonderful time, and I didn’t think about anything else except being right in the moment.’"