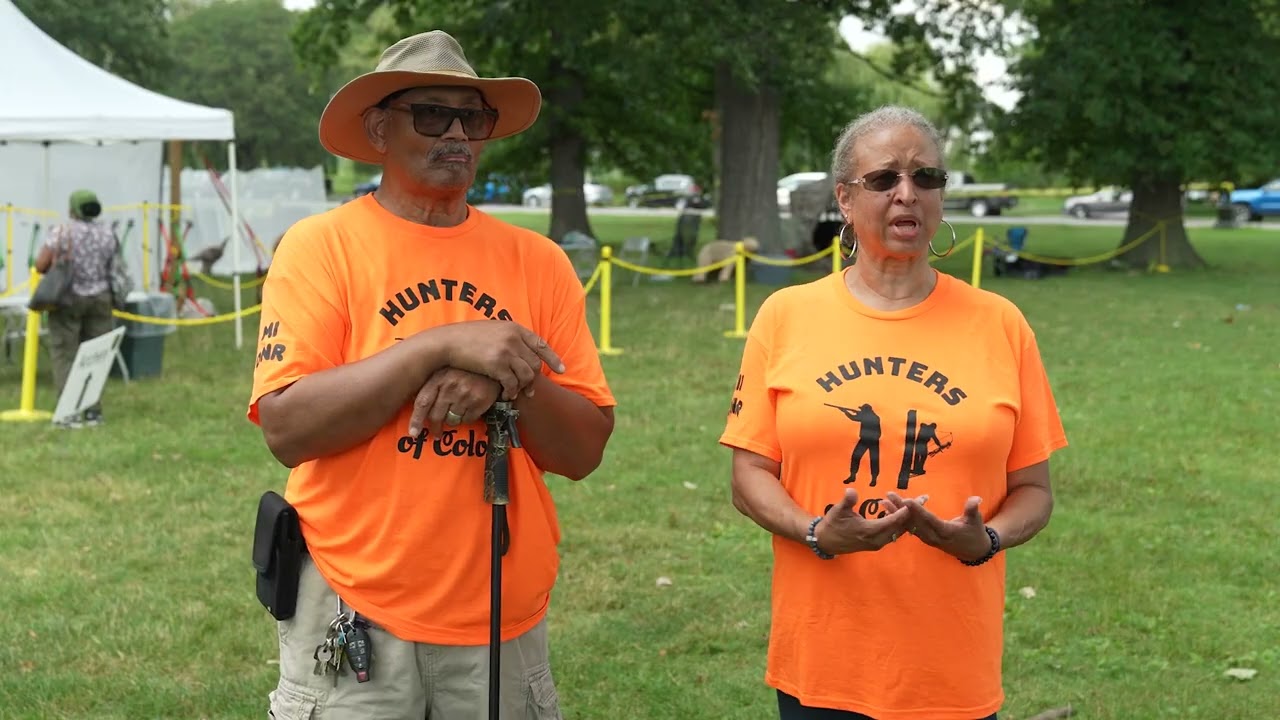 An avid archer in her early 60s, Kathryn Lynch Underwood had never aimed at a live target and had zero interest in ever doing so.

She didn’t have any plans to buy a hunting license, either.

But that all changed last year.

Underwood’s journey to hunting began long after she first picked up a bow at Elite Archery Academy — Detroit’s only Black-owned indoor and outdoor archery shooting range — under the tutelage of owner Eric “Coach E.T.” Tomlinson.

“I was hitting the balloons and I liked the way it felt,” Underwood said. “So, I kept up with (archery). But I was only interested in target shooting.”

Today, Underwood, who recently retired as a senior urban planner for the city of Detroit, has joined with Tomlinson to lead an all-female team of competitive archers called the Elite Angel Squad.

“When you see yourself — someone who looks like you — doing something new, that’s how you generate interest,” Underwood said. “It’s very important to be out here so that both the girls and the guys get to see that women do archery as well.”

Even after decades of working on public policy centered on urban food systems, urban agriculture and livestock policy and food security issues, Underwood never considered hunting for food in the traditional sense. The irony is not lost on her.

“I just didn’t like the idea of killing anything,” said Underwood, as she aimed her bow at an artificial target during a recent event designed to encourage more people of color to take up hunting. The Learning About Hunting event was organized by Michigan Department of Natural Resources at Belle Isle Park in Detroit.

Underwood added, “Then I went out hunting — didn’t get anything, but I had the experience of going out to hunt. And that was something that I couldn’t imagine doing — actually hunting an animal.”

Today, she has a different outlook.

“I came to hunting a little hesitant,” she said. “But now I understand and embrace it on so many levels. Once I understood particularly about the deer population and how it can become overpopulated because of a lack of natural predators, that’s when my views really began to change.”

Underwood went hunting for the first time last year — at age 62 — with her bow in hand and a bit of trepidation in her head.

“It really is part of the whole natural progression of things: hunting and fishing and putting us closer to nature and really appreciating it,” she said. “Instead of just going into a grocery store and seeing something already laid out, I think that you appreciate it better when it’s something that you’ve had your eye on, it had its eye on you and you take it down.”

She added, “I respect the limitations of my body,” she said. “But my parents taught me to never let my race, gender and — now I will add — age limit me.”

Underwood began to see hunting in a different light, in part, when she learned just how dependent Michigan is on the revenue from hunting (and fishing) licenses for conservation.

In Michigan, conservation funding for the Department of Natural Resources relies primarily on license fees — not taxes. Last year, those fees provided more than $65 million for conservation, habitat restoration and protection from invasive species.

Additionally, hunting and fishing have a combined $11.2 billion economic impact on Michigan and provide an estimated 171,000 jobs annually, according to a 2019 study released by the Michigan United Conservation Clubs in partnership with Michigan State University.

“We live in such a beautiful state with so much to offer in terms of natural resources,” Underwood said. “I want to do everything in my power to protect what we have for the generations that follow. I encourage all people who believe in conservation to join me in the woods, on the water or in any other way they choose to protect our natural resources.”

Hunting numbers in Michigan have been declining overall for decades as hunters have gotten older and younger generations have been slower to fill the void. In the last 25 years, the number of Michigan hunters has decreased by 250,000. That means less money for conservation, habitat restoration and protection from invasive species.

“That is why it is so important for us all to appreciate new hunters like Kathryn, as well as all those longtime hunters and anglers, who underwrite our natural resources management efforts with the purchase of those licenses,” Buggia said.

The Michigan Game and Fish Protection Fund, which is the DNR’s largest revenue source and relies almost exclusively on hunting and fishing license fees — not state taxes,  is critical to its conservation work.