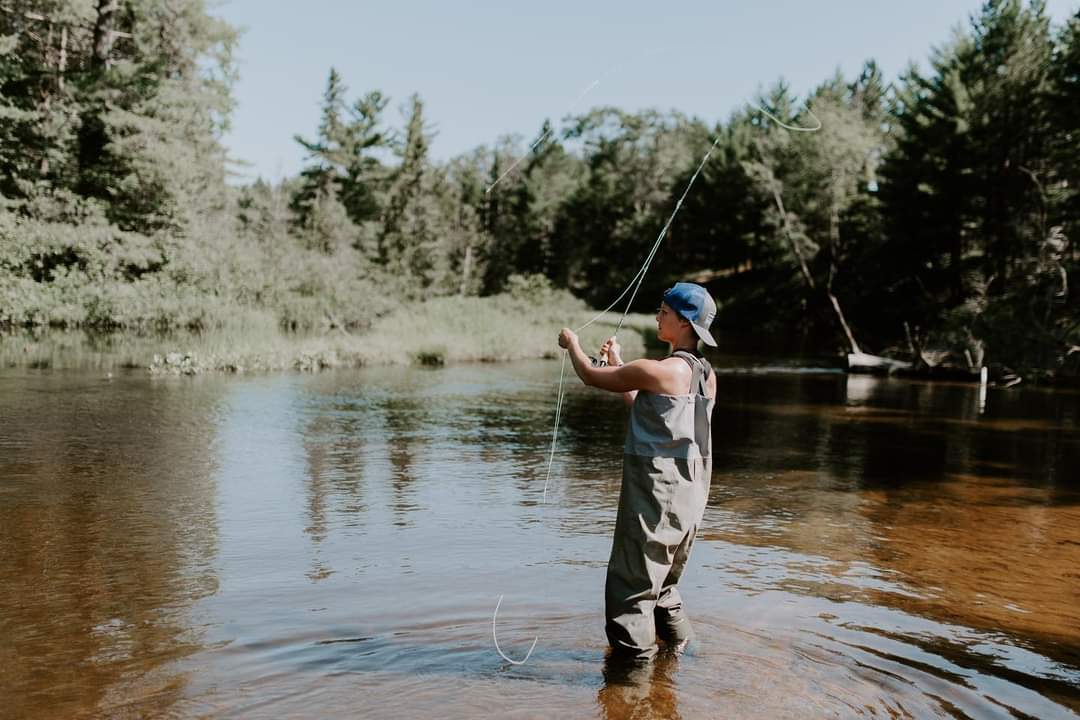 The cold, pure waters of northern Michigan and the Upper Peninsula have tugged at Sarah Topp since she was a young girl growing up not far from the trout-rich streams and bountiful inland lakes near Gaylord.

Whether as an angler, hunter or professional conservationist, Topp, who now lives in Wallace of Mellen Township in Menominee County, has been wading in and around Michigan’s waterways and woods ever since.

Michigan’s outdoors lured her in and never let go.

Today, at 31, Topp is just getting her feet wet as the newest and youngest member of the Michigan Wildlife Council. Her council duties fit nicely with her day job as the Upper Peninsula SRM (Stream Restoration Manager) for Trout Unlimited.

She still finds time to fish and hunt, but she has a deeper purpose now.

“When I was younger, I knew that if I wanted to hunt or fish, I needed a license. But, until I got older, I didn’t really make the connection that buying a license helps ensure fish and game remain plentiful and healthy,” Topp said. “In my career, I have come to understand very well the relationship between protecting and preserving our natural resources and the funding mechanism that makes that happen in our state.”

Licenses purchased by anglers and hunters generated nearly $66 million for the Michigan Game and Fish Protection Fund in 2021. The fund — not taxes — is the Michigan Department of Natural Resources’ largest revenue source for conservation work, which includes habitat improvements, disease prevention and species restoration.

Topp pointed out that everyone benefits by more people casting lines in Michigan waters and expressed gratitude to all those anglers and hunters.

Conservation activities keep animal populations in balance and protect Michigan waters from habitat degradation and invasive species, as well as safeguard the state’s forests to provide habitats for thousands of wildlife species.

Fishing and hunting have a combined $11.2 billion economic impact on Michigan and provide an estimated 171,000 jobs, according to a 2019 study released by the Michigan United Conservation Clubs in partnership with Michigan State University.

The goal of the Michigan Wildlife Council is to highlight the vital role that wildlife management plays in the conservation of the state’s natural resources.

One of Topp’s personal goals is to grow the overall number of hunters and anglers in Michigan, especially by expanding the appeal of those activities to women and members of the LGBTQ (lesbian, gay, bisexual, transgender and queer) community.

“One of the biggest barriers to individuals taking up hunting or fishing for the first time is the inability to find a like-minded mentor,” Topp said. “I was lucky growing up in a family of hunters and anglers. Not everyone has that advantage. That’s what drives me to be a mentor to others like me.”

Topp doesn’t limit her efforts to Trout Unlimited or the MWC. She also has volunteered with the Michigan Chapter of Backcountry Hunters & Anglers and currently serves as a leader of Artemis, a National Wildlife Federation program for sportswomen.

“Serving as a steward for our natural resources and helping others do the same is a privilege and also my way of honoring all those generations who came before me — including my parents and grandparents,” Topp said. “Whether you grew up around the campfire, spent time up north as a child or have an unfulfilled yearning to enjoy Michigan’s abundant outdoors, please thank the many anglers and hunters who continue to make those experiences possible.”