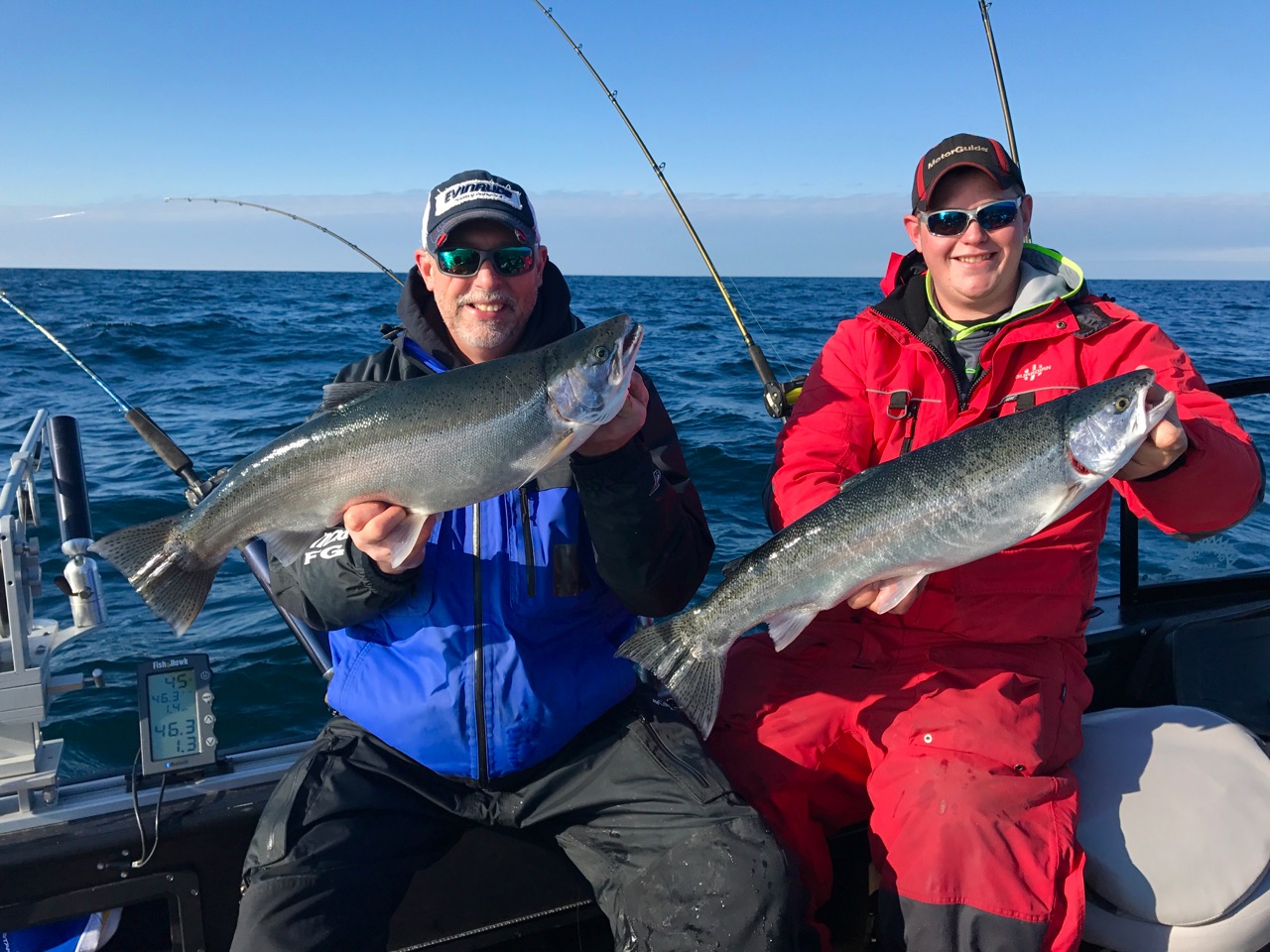 TUSTIN – Most parents only dream about this gift of time.

For years now, Mark Romanack and his 21-year-old son, Jake, have traveled the roads together in their Dodge Ram pickup. They talk. They laugh. They plan a future.

And when they arrive at their destination, they fish.

“When we get a call that there’s a good bite somewhere, we jump in the truck and we’re gone,” Jake Romanack said. “Sometimes it’s walleye, sometimes it’s perch, or trout, or salmon, or smallmouth and largemouth bass.”

The Romanacks are co-hosts of “Fishing 411,” a television series broadcast nationwide on the World Fishing Network and Carbon TV. Primarily based in the Great Lakes region and Ontario, the show – now in its 11th season – educates anglers on techniques and destinations for freshwater fishing.

They’re gone 160 nights a year, logging about 50,000 miles filming the show. One week it might be trolling for king salmon on the famed Niagara Bar in New York; another week they could be ice fishing for yellow perch on Lake Gogebic in the Upper Peninsula.

Based on the popularity of fishing in Michigan, there’s a huge potential audience for the Romanacks’ show in this state alone. Michigan’s 1.1 million licensed fishermen and fisherwomen in 2011 accounted for the fifth-highest angler participation rate in the nation, the state Department of Natural Resources reports.

Annually, fishing pumps $2.4 billion into Michigan’s economy through trip-related expenses and equipment purchases. And the federal excise taxes on that equipment provided the state with more than $11.2 million for fish and aquatic habitat conservation in 2011 alone, the DNR says. In addition, all proceeds from fishing license sales in Michigan are earmarked for a variety of fish-related conservation efforts.

Clearly, like the Romanacks, many Michiganders have a deep love and appreciation of the outdoors, said Jeff Poet of the Michigan Wildlife Council, created in 2013 to implement and oversee a public education campaign about the importance of conservation and wildlife management to Michigan’s natural resources and outdoor traditions.

“Michigan is so blessed with an abundance of water, wildlife and natural resources,” Poet said. “All of us can do our part to preserve Michigan’s great outdoors for generations to come.”

Fishing is a family tradition

Jake Romanack has fishing in his blood.

“My earliest memory is when my dad would take me out to Lake Cadillac and Lake Mitchell catching bluegill on the shoreline,” Jake said.

“Between my dad, who fishes full-time, and both my uncles and my cousins who have their own fishing show in Wisconsin, I knew what I wanted to do with my life from the start – I wanted to fish.”

Mark Romanack and his wife, Mari, raised their family near Tustin, a village south of Cadillac with just 230 residents.

Mark Romanack learned how to fish from his older brother Mike.

“My brother is eight years older than me and was gracious enough to take his snot-nosed littlest brother fishing with him,” Mark Romanack said.

As an adult, Mark Romanack turned his love of the outdoors into a career, writing magazine stories and books about Michigan’s outdoors for 30 years. Considered one of the nation’s leading authorities on walleye fishing, he also speaks frequently on other outdoor topics such as dog training, photography and hunting waterfowl.

During the winter months, the Romanacks share that knowledge through multimedia fishing seminars at boat, sport and fishing shows across the Midwest. The pair appeared Jan. 12–15 at the Ultimate Fishing Show – Detroit at the Suburban Collection Showplace in Novi.

“The shows are a great chance to meet people that love to do the same thing we like to do and talk to them about fishing,” Jake Romanack said.

The start of a new chapter

Jake has played a part in “Fishing 411” for half his life, but he joined the team full-time two years ago after earning an associate degree in business management at Fox Valley Technical College in Appleton, Wisconsin.

In each 30-minute episode, the Romanacks show viewers how they catch different species and then share helpful tips.

“The filming is what I love the most,” Jake said. “The cool thing about the filming is every day on the water feels like a mini-tournament: You’re out there to catch these big fish, so there’s a little bit of pressure. It’s really exciting.”

Walleye are his favorite.

“They’re a difficult fish to catch, but it’s by far the most popular fish in the state of Michigan,” he said.

As time goes on, Jake will continue taking on more responsibilities for the family business.

“Mari and I like to joke that Jake is our retirement plan,” Mark said. “We’d like the business to continue and we’d like to back down from it as we get older.

“Jake has all the tools for success: He’s very capable, he’s very self-motivated, and he’s the type of person who doesn’t mind rolling up his sleeves and getting it done.”

Jake, who bought his first home just before Christmas, said he’s pleased with the way his life is going. And he’s proud to continue his family’s fishing heritage for years to come.

“Our outdoor heritage is such a big deal for me and why I want to continue doing this as a profession,” he said. “The outdoors is not just something you do for fun. It really shapes a person into who they are.

“It’s extremely rewarding. I feel like when you’re out on the water, you’re in God’s country. It doesn’t get any better than that.”