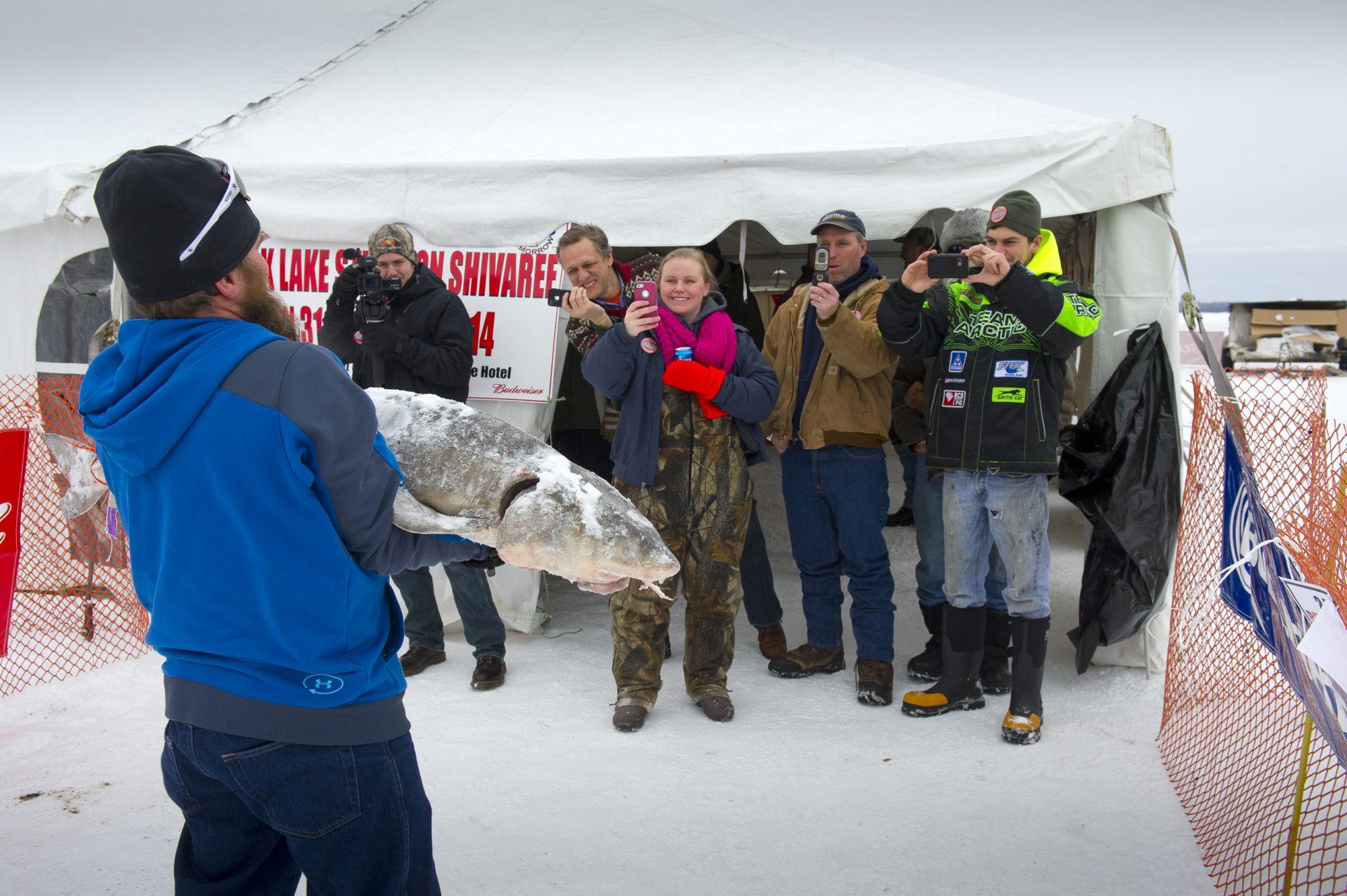 At 8 a.m. Saturday, Feb. 3, hundreds of people will hover over holes cut into the ice of northeast Michigan’s Black Lake for opening day of lake sturgeon season.

Their spears and lines will be poised above the water, waiting for the gray-green flash from the back of the 3- to 5-foot-long prehistoric fish they hope to attract with shiny lures.

Only six of them will be able to land their prey, after which the carefully regulated Black Lake sturgeon season – already limited to five days – will end.

“Last year’s season lasted just over an hour because that is how long it took fishermen to reach the quota,” said Matt Pedigo, chair of the Michigan Wildlife Council, which advances public understanding of the state’s wildlife management and its funding. “Only seven fish were to be caught, though the limit was set at six to leave a buffer. The same limits will be set this year.”

Much anticipated, the lake sturgeon season is unique not only for it’s short length, but for its sought after species. This giant can grow up to 8 feet long and live for 150 years. These bottom-feeders are prehistoric as they are members of a family of fish that has existed since the Upper Cretaceous period 136 million years ago.

Brenda Archambo, president of the nonprofit Sturgeon for Tomorrow-Black Lake Chapter, is one of the co-organizers of the Black Lake Sturgeon Shivaree, a two-day event held annually in northeast Michigan near Onaway. The Shivaree, which will be held this year on Feb. 2 and 3, serves as opening-day festivities for the Michigan Department Natural Resources-managed lake sturgeon season, and draws fishermen and revelers from across the state.

“This area is a really popular destination for people in the Detroit area all summer long, so we’re used to hosting big crowds,” Archambo said. “But the Black Lake Sturgeon Shivaree blows all of that away. And to know that it’s all because of the sturgeon makes me so happy. This event helps secure their future.”

It may seem counterintuitive, but fishing and hunting actually improve the strength of wildlife species across the board. Pedigo said Black Lake’s annual sturgeon season elevates public awareness of the unique species, and has contributed to an increase in numbers over the last 20 years.

“Not only that, but fishing and hunting licenses sold in Michigan go directly toward wildlife management and habitat restoration, which help species like the sturgeon,” Pedigo said. “Michigan’s lake sturgeon wouldn’t be doing this well if not for these funds, combined with the work of groups like Sturgeon for Tomorrow.”

Sturgeon for Tomorrow began as a grassroots group in 1995 that reported poachers spearing sturgeon as they spawned in local rivers. Their teamwork eventually congealed into an advocacy group dedicated to preserving the fish and an important northern Michigan tradition that dates back thousands of years.

“For as long as humans have been living near Black Lake, there has been sturgeon fishing,” Archambo said. “To that end, we invite our Native American friends every year to the Shivaree to pay homage. We have a special water ceremony and a drum circle to honor the season. It’s quite moving.”

Pedigo said the length of the season is “monitored closely” to ensure the population remains in balance. The quota is set currently at 1.2 percent of the adult breeding population of lake sturgeon in Black Lake. This is a very conservative harvest rate agreed on by both the DNR and co-managing tribal agencies.

The season’s regulations were developed in part to allow greater participation by fishermen while protecting the population of lake sturgeon in Black Lake.

And while other states may set higher quotas on their waters, Archambo said she’d rather catch fewer than none at all – a proposal that was actually on the table at one point in the 1990s due to fears of overfishing.

“If you took sturgeon season away, that would be like taking Santa Claus away,” said Archambo. “We’re the people of the sturgeon. We live on the lake and we care about the water. We couldn’t let them bring an end to sturgeon season, so we took action.”

All those wishing to participate in the state recreational lake sturgeon season must be 17 or older and possess a valid Michigan fishing license. In addition, all those who register for the Black Lake sturgeon season must have a lake sturgeon tag, available for free from all license vendors. An early registration will be held Feb. 2 from 2-7 p.m. at the DNR Onaway Field Station, located about 5 miles north of Onaway on Route 211. Fishing hours are 8 a.m.-2 p.m. Feb. 3-7, or until the quota is reached.

“Sturgeon fishing is entrenched in our culture,” Archambo said. “You have up to four generations of spear makers and decoy carvers living near the lake whose whole life is dedicated to sturgeon. Our lives are intertwined.”