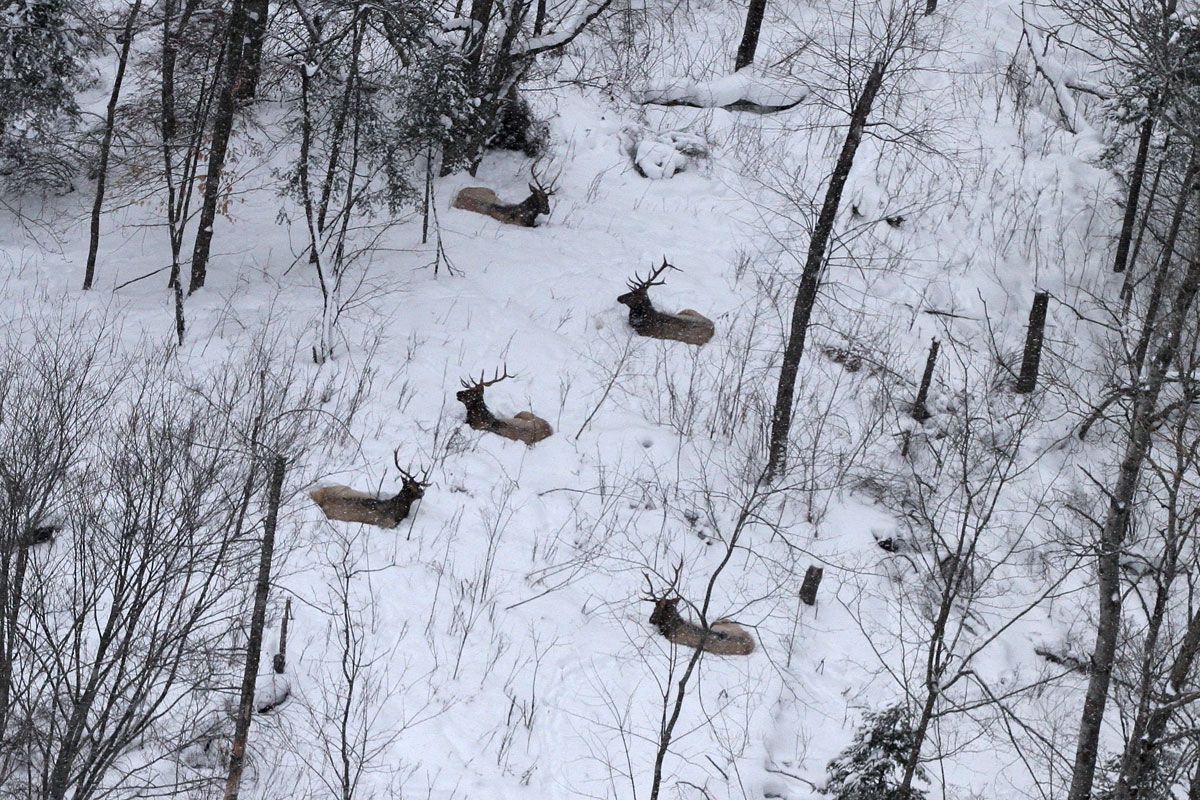 As the single-engine Cessna crisscrosses the wintry skies, Jennifer Kleitch spots a piece of Michigan history.

“Elk on the right!” Kleitch shouts, a smile spreading across her face as she quickly tallies the grouping of massive mammals grazing in the snow-covered forest.

Kleitch and many others employed by the Michigan Department of Natural Resources spent eight days in January zigzagging over huge swaths of northern Michigan to determine the size and scope of the state’s elk population.

“The elk survey is one of the many tools we use to keep the Michigan herd in a healthy state,” said Brian Mastenbrook, DNR wildlife field operations manager in Gaylord.

This year’s survey is especially exciting because 2018 marks the 100th anniversary of the elk’s reintroduction to the Great Lakes State. Michigan’s current herd dates to 1918, when seven Rocky Mountain elk were transplanted to the Gaylord area from the western United States.

“Now a century later, Michigan is home to one of the many large, free-ranging elk herds east of the Mississippi River,” said Matt Pedigo, chair of the Michigan Wildlife Council, created in 2013 to educate the public about the importance of conservation and wildlife management, as well as the direct impact hunters have on Michigan’s wildlife and natural resources.

“This is surely one of the greatest conservation success stories in Michigan history,” he said.

The final results from the 2018 elk survey are expected in late February. But wildlife experts estimate more than 1,100 elk live in and around this sprawling state land – well above the goal population of 500 to 900. Managed as a wildlife area by the DNR, the quiet forests provide the perfect food sources and habitat for elk and many other wildlife species.

But it’s been a long road for elk, which disappeared from Michigan’s landscape in the late 1800s.

“Early Michigan settlers were enchanted by elk, but they didn’t realize the harm they were causing by taking too many of them,” Pedigo said. “And the science of sustainable hunting hadn’t even been discovered yet.”

Sustainable hunting plays a vital role in maintaining balanced ecosystems, ensuring that not too many or too few of each game species is taken. Without legal, regulated hunting, wildlife populations can outgrow their food sources, potentially leading to a decline in both plant and animal species until equilibrium is restored. Therefore, hunters play a primary role in maintaining the balance between elk numbers and habitat.

Determining the size of the elk herd helps the DNR decide on the number of hunting permits it will issue each year.

Elk hunts have taken place annually in Michigan since 1984. Between 30,000 and 40,000 people apply for a chance to hunt elk every year. But the number of licenses issued generally ranges from only 100 to 400, depending on the herd’s size.

“The worst thing for the elk range would be to have too many elk, and the survey helps prevent that,” Mastenbrook said. “The second worst thing would be to have so few elk that people can’t view them and enjoy them. Maintaining that balance is key to the success of the herd.”

The bulk of wildlife management projects in Michigan, including those involving elk, are funded through the purchase of hunting and fishing licenses and equipment – not state taxes.

All told, hunters generate $2.3 billion annually for the state of Michigan – through licenses and equipment purchases, trip-related expenses, state and local taxes and more. Plus, according to the U.S. Fish and Wildlife Service, hunting specifically supports 34,400 jobs in both urban and rural Michigan communities.

“Thanks to hard work by the DNR, conservationists and the strong support of hunters, we’ve been able to reverse that previous harm and increase the Michigan elk population to great numbers,” said Pedigo.

The DNR and partners such as the Rocky Mountain Elk Foundation and the Michigan United Conservation Clubs work diligently to manage elk habitat for hunting, as well as viewing areas for the thousands of nature lovers who visit nearby elk-viewing hot spots all year.

The aerial surveys are critical in painting a picture of the health of Michigan’s elk herd.

DNR crews annually fly around 8,000 miles at 80 miles per hour in a single-engine aircraft in all weather for the survey. Two planes, each carrying a pilot and two “spotters,” fly around 90 predetermined grids from Gaylord to Indian River and Onaway to Atlanta to find and count the elk.

“We do the count in the winter because it’s so much easier to see them when there’s snow on the ground,” Mastenbrook said. “The faster we can do it, the less likely they are to move around from one grid to another or get counted twice.”

The planes skate just 500 feet above ground level, but it’s still tough to spot them.

And the flight can be tough on the spotters.

“We have to pull people from fisheries division or forest resources division or other DNR divisions to get enough good fliers with strong stomachs to do the count,” Mastenbrook said.

When an elk is spotted out the right window, for instance, the pilot tips the plane to the right and circles to allow for a better view. Then the plane circles left so both the observer and pilot can count for added accuracy.

“Honestly, it is like riding in a boat or on a really bumpy road,” said Kleitch, a DNR wildlife biologist who’s flown the survey dozens of times. “If it’s windy and with hills and turns, it can get pretty bad up there. My stomach was kind of iffy the first few times, but now I’m rock-solid.”

Even on days when she needs Vernors to settle her stomach, Kleitch said she’s thrilled to help.

“It’s just a huge privilege to be part of the history of elk in Michigan, and I’m grateful for it every day,” she said.