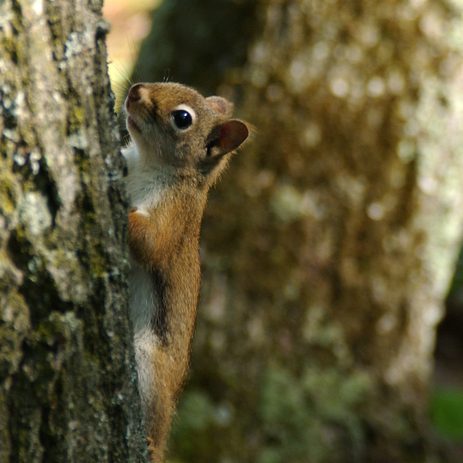 They’re mischievous. They’re intelligent. And if you have a front lawn, chances are you saw one bounding across your grass today.

They’re squirrels, and even though you may think you know everything – or don’t think you need to know anything – about them, they play a vital role in keeping Michigan’s ecosystems in healthy shape.

“Squirrels are beneficial for Michigan wildlife across the board for a variety of reasons,” said Adam Bump, furbearer specialist for the Michigan Department of Natural Resources.

“They help sustain our forests and oak savannahs, they’re a valuable food source for many predators and they’re plentiful. They also do a lot of good for the state that most people don’t give them credit for.”

Michigan is home to nine species of squirrel, including two types of flying squirrel. The most recognizable species in Michigan is probably the eastern fox squirrel, which sports gray fur on its back and yellowish fur on its belly over a hefty body frame 8 to 10 inches long. They primarily eat acorns, hickory nuts and walnuts, and their tree nests can often be found in the trees of dense urban and suburban neighborhoods.

“Fox squirrels are very adaptable,” Bump said. “Not many animals can live in such close proximity to people. They’ve figured out how to use our power lines to get around, how to cross busy streets and how to get into our birdfeeders.”

The eastern gray squirrel is another common Michigan squirrel. It is about the same size as the fox squirrel, but with fur colored from light gray to jet black. Red squirrels are significantly smaller, with reddish fur and tufts of hair on the tips of their ears. These squirrels cause the most problems for homeowners, as they sometimes chew into people’s homes to build their nests.

“For that reason, squirrels are sometimes seen as pests,” Bump said. “On the other hand, there’s a thriving community of squirrel hunters in the state, and for them, squirrels are a game species that provides an interesting challenge.”

The Michigan squirrel hunting season goes from Sept. 15 through March 31 every year. Last year it was expanded to include the entire month of March.

“The coolest thing about squirrel hunting is that it’s a way for kids or someone who may be interested in hunting to try it for the first time,” Bump said. “You don’t need a lot of equipment, you don’t need to be really quiet and you don’t have to wait a long time before you see a squirrel if you’re out in the woods. It’s a great way to introduce someone to hunting.”

Of course, anyone who wants to hunt squirrels must buy a Michigan hunting license to do so. And the funds acquired from licenses purchased by hunters and anglers directly fund the state’s conservation efforts. So as a game species, squirrels play a vital role in Michigan’s wildlife management.

The Michigan Wildlife Council was created in 2013 to increase public knowledge of the importance of wildlife conservation, as well as the crucial role hunting and fishing play in managing Michigan’s wildlife and natural resources.

“Anytime someone purchases a hunting license in Michigan, it goes toward all wildlife in the state, not just one,” Bump said. “Habitat work for squirrels also benefits other species, such as deer, elk, bear and ruffed grouse.”

Fox and gray squirrels prefer living in trees that produce hard mast, such as acorns, hickory nuts and walnuts. These types of trees provide cover for the squirrels, where they build their nests, and the mast serves as their primary source of food.

These squirrels are perhaps most famous for their habit of burying this mast, which gives them another reason to be valued by conservationists.

“A lot of time squirrels are able to find their nuts and dig them back up and eat them, but they miss a bunch,” Bump said. “This is extremely valuable for the tree, because it provides a way for it to have its nuts transported a short distance and put directly into ground.

“The squirrels aren’t doing this out of the kindness of their hearts, but in the long run, they’re helping their source of food – and helping the forest to thrive.”