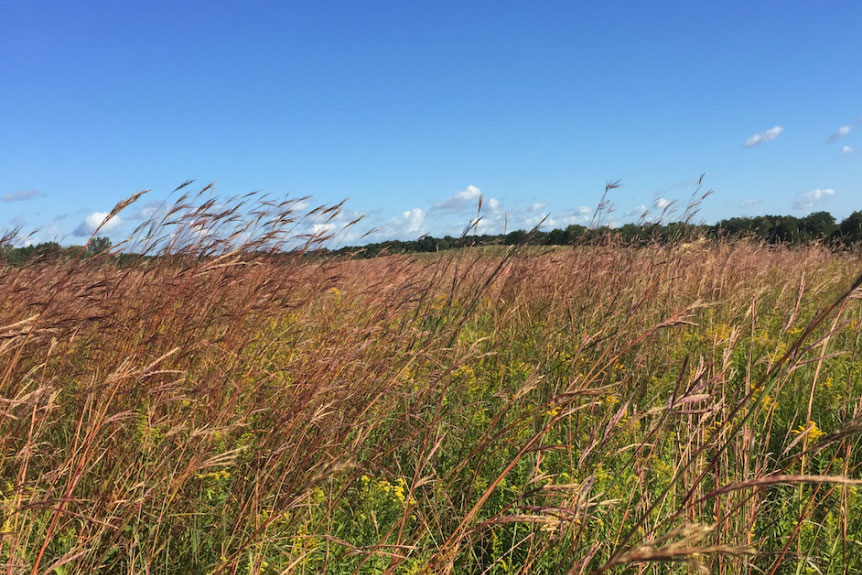 Did you know it is easy to turn your backyard into a Michigan conservation project — and that you could get a grant to help you pay for it?

Through the Michigan Department of Natural Resources’ Wildlife Habitat Grant Program, landowners across the state can apply for funds to improve the quality and quantity of wildlife habitat. And that work could go a long way toward ensuring that native Michigan wildlife continues to thrive, and sustainable populations are maintained into the future.

“If you own land in Michigan, you hold the keys to helping improve the state’s wildlife populations,” said Clay Buchanan, statewide grant coordinator for the DNR’s Wildlife Division. “Private landowners could do something on a local scale, such as turn a 4-acre plot into a feeding area for deer. Or something major like upgrade 100 acres of grassland to help multiple species at once. Habitat enhancement is beneficial at all scales.”

Buchanan oversees the Wildlife Habitat Grant Program, now in its seventh year. The program is administered cooperatively by the DNR’s Grants Management Section and Wildlife Division. Projects are funded with a portion of the revenue from hunting and fishing licenses sold each year — not from state taxes.

“Hunting and fishing is actually critical to funding these projects because license fee dollars help the DNR run day-to-day operations,” Buchanan said. “They also support the research that helps us understand how our wildlife populations are doing.”

On top of that, hunting and fishing equipment purchases also are a key source of funding for conservation projects. The Federal Aid in Wildlife Restoration Act, commonly called the Pittman-Robertson Act, levies a surcharge on sales of sporting arms, ammunition and archery equipment. The Federal Aid in Sport Fish Restoration Act, also known as the Dingell-Johnson Act, is a levy on fishing-related equipment.

Proceeds from each act are distributed among states for outdoor conservation and management activities. In 2018, the Michigan DNR received $24.3 million in Pittman-Robertson funds and $10.7 million in Dingell-Johnson funding.

All those dollars are earmarked for conservation of Michigan’s great outdoors.

“Wildlife areas need to be actively managed by natural resource professionals in order to thrive,” said Matt Pedigo, chair of the Michigan Wildlife Council. “People sometimes think that fishing or hunting will reduce wildlife populations. But contrary to what people may believe, hunting and fishing are actually the cornerstone of the state’s conservation efforts.

“Fishing and hunting seasons are tightly regulated to make sure that Michigan’s wildlife will be here for generations to come.”

The Michigan Wildlife Council is dedicated to increasing public awareness about the importance of wildlife management and highlighting wildlife conservation efforts — including the work that’s done as part of the Wildlife Habitat Grant Program.

In 2018, the DNR approved grants totaling $1,037,900 for 14 projects under that program. This included more than $68,000 in Southeast Michigan for projects involving native grassland restoration, native wildflower planting and tree planting, which provide additional food and cover for wildlife.

“Collectively, these projects offer large-scale habitat improvement for many Michigan wildlife species,” Buchanan said. “The grant is open to anyone interested in improving habitat.”

The Huron Pines project is utilizing $110,000 to re-establish several hundred acres of forest openings, grassland and pine barren habitat near Gaylord in a region that’s home to native elk and wild turkey populations. The work in Pigeon River Country includes removing invasive species, replanting grasslands and staging prescribed burns to open up spaces for elk and deer to find food. It will also help reduce the risk for large, intense forest fires.

The National Wild Turkey Federation was awarded $400,000 to conserve or enhance approximately 1,300 acres of Michigan wildlife habitat over the next two years. This will include removing low-lying shrubs and planting annual species, such as rye and clover, to build up the soil and allow grasslands to take hold.

“A number of wildlife species are going to benefit from this, including turkey, deer, birds, rabbits and the endangered Karner blue butterflies,” Buchanan says. “The big story here, though, is the level of partnership going into this. Real conservation efforts won’t find success without this kind of teamwork. It builds networks that will hopefully snowball into larger conservation efforts.”

To learn more about the Wildlife Habitat Grant Program or to apply for a grant, visit michigan.gov/dnr and click on “Apply for Grants.”