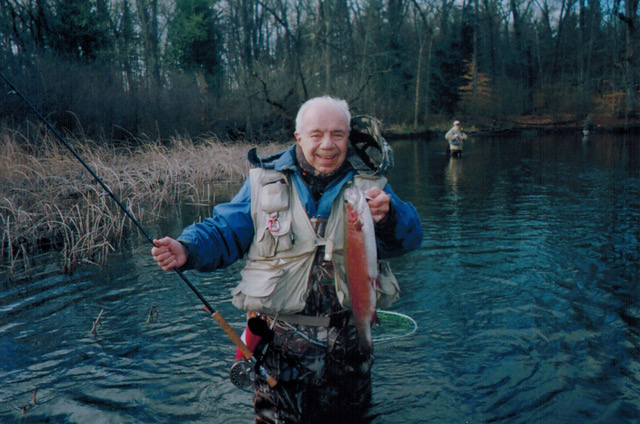 The last Saturday in April is better than Christmas for Michigan trout fishers.

“Opening day of trout season is an exciting day for anyone who fishes. It’s the day when streams that have been closed all winter to protect spawning trout are once again open for fishing. It’s a real celebration for a lot of folks,” said Jeremy Geist, Great Lakes stream restoration manager for Michigan Trout Unlimited.

This year’s opening day of trout season is April 27, and anglers are already gearing up for it.

Michigan is nationally known as a trout fishing destination, with thousands of miles of cold, quality trout streams and hundreds of trout lakes accessible to anglers.

The good news for metro Detroit is you don’t have to go far to find great fishing. Paint Creek and the Huron River, both in Oakland County, generate a lot of buzz for the trout opener, said Cleyo Harris, fisheries biologist for the Michigan Department of Natural Resources.

Paint Creek flows from Lake Orion to Rochester. Access is abundant, with a number of municipal parks and the Paint Creek Trail meeting the creek at multiple locations.

Anglers who want to use bait often target Paint Creek at Rochester Municipal Park in downtown Rochester for the opener; those who prefer to use flies or artificial lures will venture to the areas upstream of Tienken Road.

The Huron River at Proud Lake Recreation Area is not a traditional trout stream. But thanks to the DNR’s adult trout stocking program, there are plenty of good opportunities for anglers on opening day — and beyond.

This fishery is quite popular with anglers, affording them a chance to catch large trout without having to drive hours to find them.

Pete Howard, 78, has been a trout fisherman for 60 years and spends much of his time angling on the Huron River.

“The opener is like the Super Bowl: Everybody and his brother and his uncle and his cousin are out there having a great time,” said Howard, a retired General Motors engineer who lives in Sterling Heights.

When he’s not fly-fishing, Howard likes to volunteer as a fishing instructor at summer camps for children with disabilities.

“A lot of these kids have never held a fishing pole in their lives. But I think every kid deserves to feel the thrill of reeling in a fish at least once,” he said.

But most days you can find Howard wading on the Huron River near the Wixom Road bridge, casting his handmade flies into the water.

And that’s just the way he wants it.

“There’s nothing like a trout hitting your fly, and then you have to fight this fish,” he said. “You hope he doesn’t go around a log, and you hope your line is good and that there’s no knots or nicks in your line. And then you land this beautiful fish. And you take a picture of it. And you put it back in the water.

Nearly 1.1 million people fish in Michigan each year, keeping cash registers ringing for outdoor retailers and other businesses like restaurants, hotels and gas stations that cater to them. According to a recent report from Michigan United Conservation Clubs, fishing contributes $2.3 billion annually to the state’s economic well-being and supports more than 35,000 jobs.

All of that fishing also translates into big dollars to protect Michigan’s waterways and the fish and wildlife that call them home. In 2018, fishing license sales alone generated $26.4 million for Michigan wildlife and natural resource conservation.

Under state law, that money is entirely dedicated to wildlife management and conservation activities.

“With fishing season getting underway, it’s a good time to remind people that it’s the purchase of fishing and hunting licenses and equipment — not state taxes — that provides most of the funding for conservation projects throughout the state,” said Michigan Wildlife Council chairman Matt Pedigo.

Besides fishing and hunting license sales, equipment purchases also are a key source of funding for conservation projects.

Proceeds from each act are distributed among the states for outdoor conservation and management activities. In 2018, the DNR received $10.7 million in Dingell-Johnson funding and $24.3 million in Pittman-Robertson funds.

“So when you buy your license for the 2019 fishing season and take the kids shopping for new poles, you’re helping to preserve Michigan’s amazing outdoor heritage,” Pedigo said.

Michigan’s 2019 fishing licenses are good through March 31, 2020, and available online through the DNR.

And on April 27? Anglers will be ready.