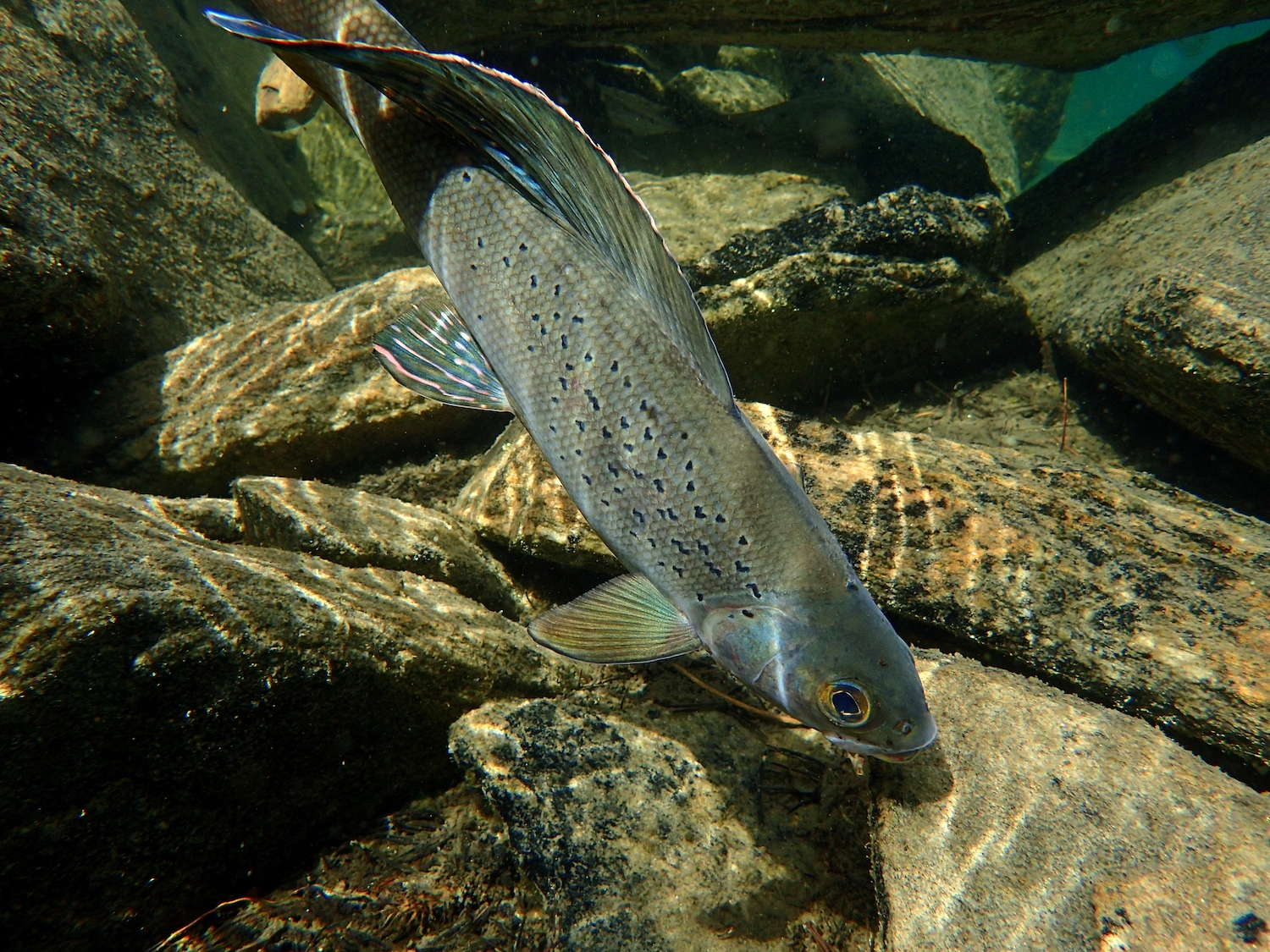 For Ed Eisch, the ongoing effort to reintroduce the grayling to northern Michigan streams is nothing less than an opportunity to right what he considers a historical wrong.

After all, the fish’s demise in Michigan more than a century ago was caused by both unchecked logging that destroyed spawning grounds and unregulated fishing that further decimated grayling populations.

“I think for us to be able to bring them back would be sort of a testament to all of the good work that’s been done to restore aquatic habitats in Michigan and a testament to the high-quality streams in our state,” said Eisch, who is the fish production program manager for the Michigan Department of Natural Resources and is based out of the DNR’s Traverse City Customer Service Center.

Armed with modern-day scientific techniques and knowledge, Eisch and other biologists are heading what figures to be a years-long effort to return the native species to Michigan waters.

Not since the late 1800s has the iridescent fish with the distinctive sail-shaped dorsal fin roamed the Lower Peninsula’s coldwater streams, where it was the dominant salmonid and also served as the namesake for the Crawford County seat in northern Michigan.

“We’re trying to restore something in the state that’s been lost for nearly 150 years,” said Troy Zorn, a Marquette-based fisheries research biologist specialist for the DNR. “I think as much as anything, it’s a piece of our state’s history and natural heritage. I think the idea of bringing some of that back here is kind of a homecoming, an opportunity to restore something that’s been lost.”

Building on past successes

The grayling initiative is also in keeping with broader efforts to manage the state’s outdoor resources for the enjoyment of current and future generations, said Nick Buggia, chair of the Michigan Wildlife Council. State legislators created the council in 2013 to boost public knowledge of the importance of wildlife management and conservation, as well as the positive impact that hunting and fishing have on Michigan’s wildlife and natural resources.

“We have to actively manage wildlife populations and habitats if we want to ensure their long-term survival,” Buggia said. “It’s the basic idea of ecology, which is that everything affects everything else.”

Reintroduction of the grayling would also represent another in a long line of Michigan wildlife conservation success stories, he said. For example, elk, moose and wild turkey, all of which were native to the state, became extinct in Michigan and then were brought back through concerted management programs.

As with the grayling, long-ago logging practices and other human-made activities and environmental changes decimated those species’ native populations, Buggia noted.

“Grayling were kind of in trouble for a while, but what really got them was the rapid deforestation of the northern Lower Peninsula,” he said. “The loggers thought they had an inexhaustible supply of timber. They took all that timber off and totally changed the stream habitat. Between that and the overfishing, it just spelled the death knell for grayling. But we know better than that now.”

Indeed, not only were practices such as unfettered logging and fishing abandoned years ago, but the people working on grayling restoration in Michigan are also relying on more recent scientific breakthroughs.

For instance, they will apply lessons learned by their counterparts in Montana, who have helped replenish grayling populations in that state. Because of geology’s variations, Michigan and Montana are the only places where grayling were native in the contiguous United States.

“It makes me much more optimistic than I would have been without knowing what Montana has learned,” Eisch said.

But there’s still no guarantee that Michigan will achieve its goal of reestablishing a self-sustaining grayling population, Zorn said, noting the failures of similar attempts over the years.

“The whole thing is an experiment,” he said. “The reintroduction process and conditions in the streams have to be just right to achieve success.”

So far, funding for Michigan’s fledgling grayling initiative has come mainly through grants, including from the Consumers Energy Foundation, the Petoskey-Harbor Springs Area Community Foundation and the Henry E. and Consuelo S. Wenger Foundation.

In May 2019, Michigan obtained 10,000 grayling eggs from Alaska’s Chena River, home to a vibrant, self-sustaining population of the species.

“Genetically, they should be rock-solid,” Eisch said. “For founding our brood stock, we wanted to go with the best population that we could. This was possible only thanks to the extra effort that our partners with the Alaska Department of Fish and Game were ready and willing to put in.”

The fish that have hatched from those eggs — which originally were housed at Michigan State University while preparations were made for them at the Oden State Fish Hatchery in Alanson — will spawn with those produced from two more batches of eggs that the state will get from Alaska in 2021 and 2022. The plan was to bring the second-year eggs here this spring, but pandemic complications scuttled that.

Assuming that the fish now housed at Oden pass an inspection by MSU fish health specialists, the DNR will move them to the Marquette State Fish Hatchery early this fall. There, once they reach maturity in up to six years, they will produce eggs that the DNR will introduce to select northern Lower Michigan waters.

Zorn is in charge of identifying streams that would make good homes for grayling, which prefer cold water with a stable flow, a gravel-to-sand mixture for spawning, and some overhanging wood and aquatic vegetation for cover.

Ideally, the bodies of water also won’t have an overabundance of brown trout, which are known to prey on young grayling.

“That’s going to be kind of the balance — finding habitat that is good enough for grayling but not so good that it’s great for brown trout,” Zorn said.

Another consideration: Communities along each stream must nominate it for grayling reintroduction.

“We don’t want to attempt to put fish in a river system where there’s not public support for it,” Zorn said.

For now, a main focus is the Manistee River system, where the DNR has teamed up with the Little River Band of Ottawa Indians.

Other strong candidates include the Jordan River, a tributary of Lake Charlevoix; the Boardman River, near Traverse City; and the West Branch of the Maple River in Emmet County.

Establishing a permanent home for grayling in any Michigan stream could serve as a defining moment for the people of Michigan, Zorn said.

“This is kind of a once-in-a-career type of thing,” he said. “It’s a neat opportunity to see if we can bring something back that’s been missing for a long time.”

More information about the grayling restoration effort is available at migrayling.org.