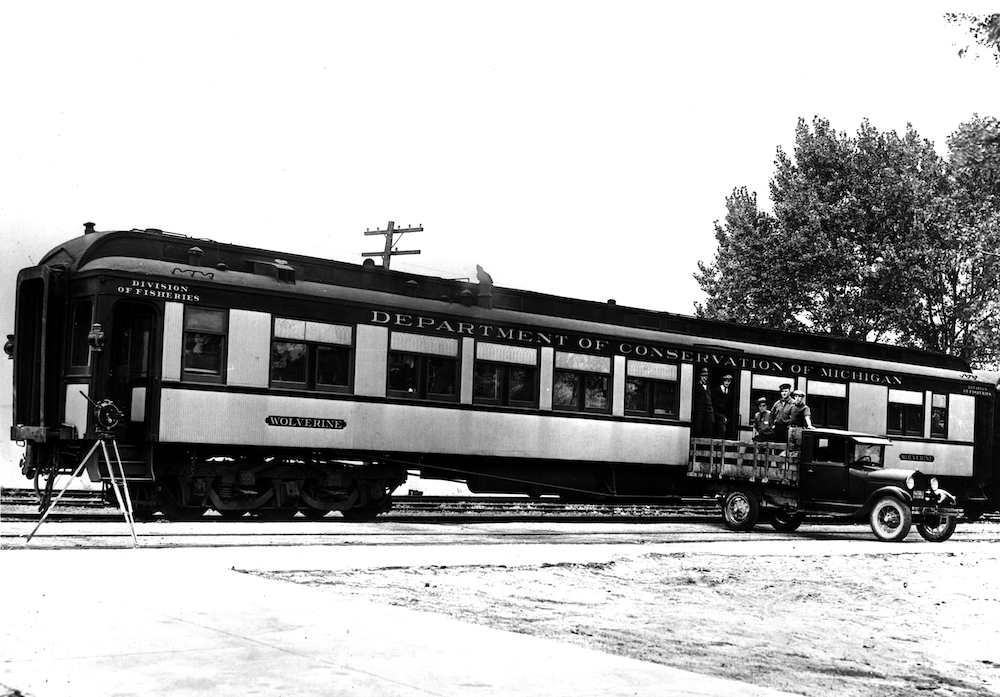 One hundred years ago, the Michigan Department of Conservation — now the Department of Natural Resources (DNR) — embarked on a mission to conserve, protect and manage Michigan’s great outdoors.

The 100th year is a true milestone and testament to the dedication of the department cause for celebration.

“This is really about a century of hard work and commitment by thousands of DNR employees and our partners to make Michigan an amazing place where fish, wildlife and forests thrive and where we can connect to nature and our state’s outdoor heritage,” said Dan Eichinger, DNR director.

Hunters and anglers also play an important role in wildlife management and the conservation of natural resources, Eichinger said. State lawmakers created the Michigan Wildlife Council in 2013 to increase public understanding of those efforts.

“Hunters are absolutely conservationists at heart,” said Ashley Autenrieth, DNR deer program biologist. “For example, we rely on hunters to keep deer populations in check. Without annual deer harvests, Michigan deer would suffer from starvation and disease caused by overpopulation.”

In fact, hunting is an integral part of the North American Model of Wildlife Conservation, a set of principles that have guided wildlife management and conservation decisions in the U.S. and Canada since it was put forth in the late 1800s.

The model, the only one of its kind in the world, was developed following the near extinction of North America’s bison population. This prompted hunters and anglers to reexamine their role in the stewardship of the continent’s natural resources.

It has two basic principles: Wildlife belongs to all North American citizens, and it should be managed in such a way that populations will be sustained forever.

Since its inception, the model has been applied to a wide range of native plant and animal species to ensure their continued survival in Michigan and across the nation. It guides states as they set limits to protect wildlife from disappearing, and it also incorporates the responsibility for managing wild habitats by outdoorsmen.

One of the model’s biggest early proponents was President Theodore Roosevelt, often referred to as the “conservation president.” During his presidency, Roosevelt helped establish 230 million acres of public lands, including 150 million acres that were specifically set aside as national forests.

He was also an avid hunter and took every opportunity he could to tout the benefits of hunting.

“In this day and age, where we’re so far removed from our food sources as well as from nature itself, it’s easy for someone who doesn’t hunt to say they’re against hunting,” Autenrieth said. “But if anything, hunters show more respect for forests and wildlife than anyone else. They’re also the ones working and contributing financially to guarantee the future of many species.”

MWC Chairman Nick Buggia points out that sportsmen and sportswomen also contribute financially to managing the state’s public lands. Fees built into hunting and fishing licenses and related equipment like firearms and fishing gear are dedicated to state efforts to manage forests and waterways.

“Many people — including hunters — assume that habitat restoration and endangered species management is paid for by tax dollars, but it isn’t. The majority of wildlife conservation dollars come directly from hunting and fishing,” Buggia said.

“On behalf of the council, I congratulate the DNR on a century of good work on behalf of all Michiganders.”