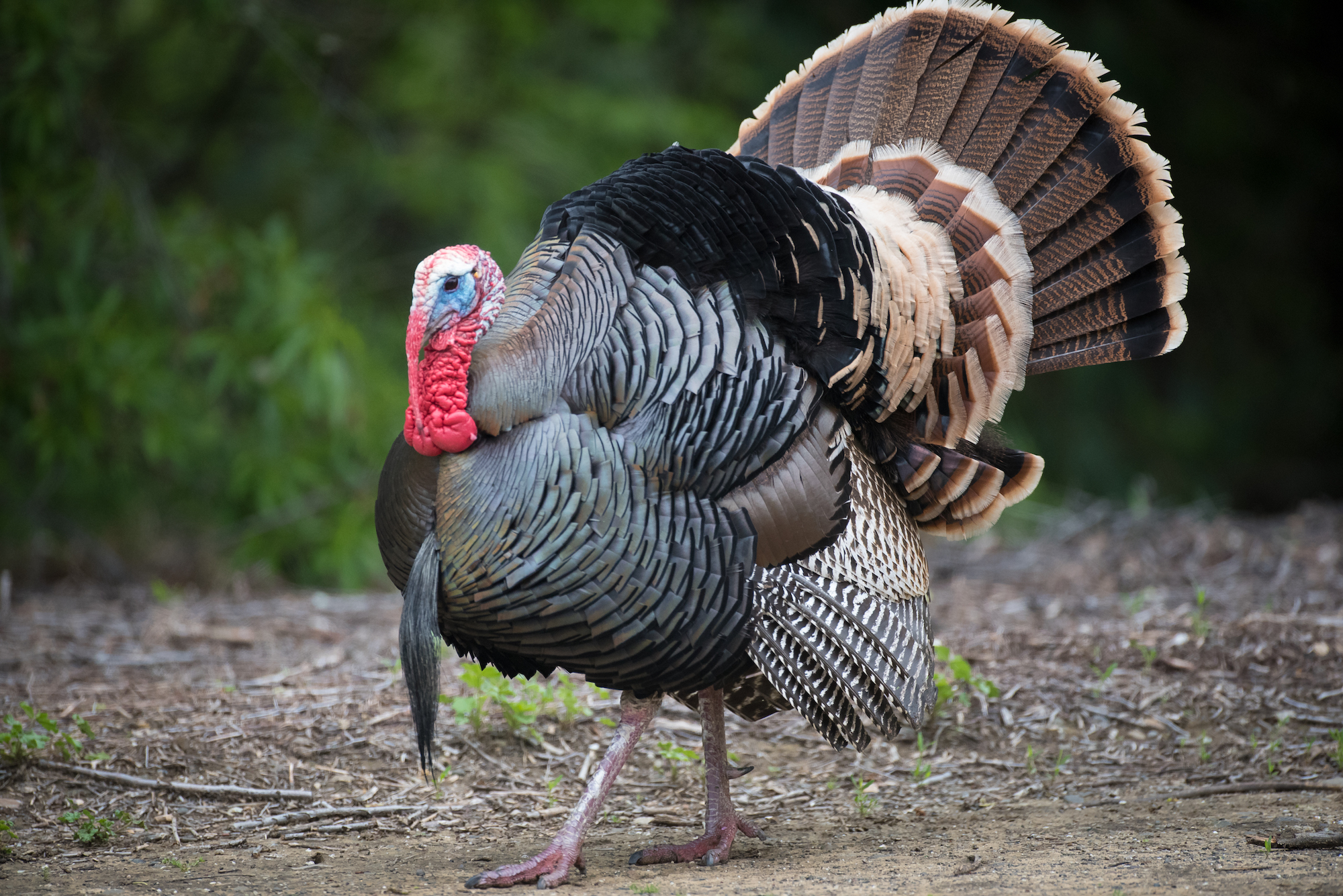 Dash Pilon, 10, and Preston Pilon, 12, discovered a fun outdoor game this summer – chasing wild turkeys out of the family garden.

The birds have come calling a couple of times a week ever since.

“I think turkeys are pretty cool-looking, and I like to watch them when they visit,” Dash said. “My family likes to watch them too, except when they get in the garden and walk all over everything. That’s when our game starts.”

As soon as the boys see the turkeys enter the forbidden zone, they go outside onto the back deck and begin slowly clapping. Dash baas like a sheep and Preston moos like a cow.

“We were winning for a while,” Preston said. “The turkeys would see and hear us and go back into the woods. They pretty much just ignore us now. They only leave if my mom or dad yells at them.”

The brothers are lucky to be living in a time when they can enjoy frequent visits from the unique birds.

That wasn’t always the case in Michigan.

From the early 1900s to the 1950s, the wild turkey had all but disappeared from Michigan. Unregulated hunting and the degradation of its habitat were the culprits.

“Thanks to a massive conservation effort over the last 70 years, there are now more than 200,000 of the birds found in every corner of the state,” said Nick Buggia, chair of the Michigan Wildlife Council, created in 2013 to build awareness about the importance of wildlife management and conservation in preserving Michigan’s outdoor heritage.

That’s because turkeys raised like livestock and then released still behaved like domesticated birds and were ill-equipped to live in the wild, falling prey to disease, predators and weather.

In the 1950s, the Michigan Department of Conservation (now the Department of Natural Resources, or DNR) purchased 50 wild turkeys from Pennsylvania and released them in West Michigan.

Today, they’re back. Michigan is No. 8 in the nation for its wild turkey population.

In fact, the numbers have increased to the point where hunting is allowed. The state’s spring turkey season is open in every county in the state, and fall hunts are offered in some areas of Michigan prior to Thanksgiving.

“The restoration of the wild turkey in Michigan is one of our greatest conservation success stories,” Buggia said.

The sale of hunting licenses directly provides much-needed revenue to fund wild turkey management efforts now and into the future.

“Sportsmen and women play an essential role in conservation efforts throughout the country,” said Rebecca Humphries, CEO of the National Wild Turkey Federation, a nonprofit dedicated to the conservation of the wild turkey and preservation of America’s hunting heritage.

“Many people don’t realize, including some hunters and anglers, that the sale of licenses and equipment – not state tax dollars – are the primary source of conservation funding for Michigan and other states.”

Licenses purchased by hunters and anglers generated an estimated $65.5 million for the Michigan Game and Fish Protection Fund in 2020.

The fund is the DNR’s largest revenue source and is critical to its conservation work. Fishing and hunting equipment sales raised an additional $29.4 million to support wildlife and natural resource management.

Conservation activities keep animal populations in balance, protect Michigan waters from habitat degradation and invasive species, safeguard the state’s forests to provide habitats for thousands of wildlife species and reduce the risk of wildfires and flooding.

Humphries said that all Michiganders benefit from these funds through better access to public lands, improved soil and water quality, habitat restoration and management, fish and wildlife research, boat launch and trail construction and many other projects.

Along with conservation, hunting and fishing are significant economic drivers for our state.

Combined, they generate $11.2 billion for Michigan’s economy every year and support 171,000 jobs, according to a 2019 study released by the Michigan United Conservation Clubs in partnership with Michigan State University.

Michigan is No. 1 among Great Lakes states for jobs created from hunting and fishing purchases.

In every region of the state, the number of jobs created and supported by hunting and fishing puts the industry in the top 10% of job-creation industries. In addition, the industry contributes $3.3 billion in salaries and wages to Michigan households and has a $7.2 billion value-add to our state’s gross domestic product.

Dash and Preston said they’ve been learning a lot about wild turkeys since the birds wandered into to their lives – like how they can fly at speeds of up to 55 mph and they’re social animals who like to be around each other.

They also learned the turkey they eat is the domesticated version of the birds that visit them.

This Thanksgiving, as Dash, Preston and their family sit down for their meal, the boys know something they’ll be thankful for – the wild turkey and the conservation efforts that keep them thriving in Michigan.