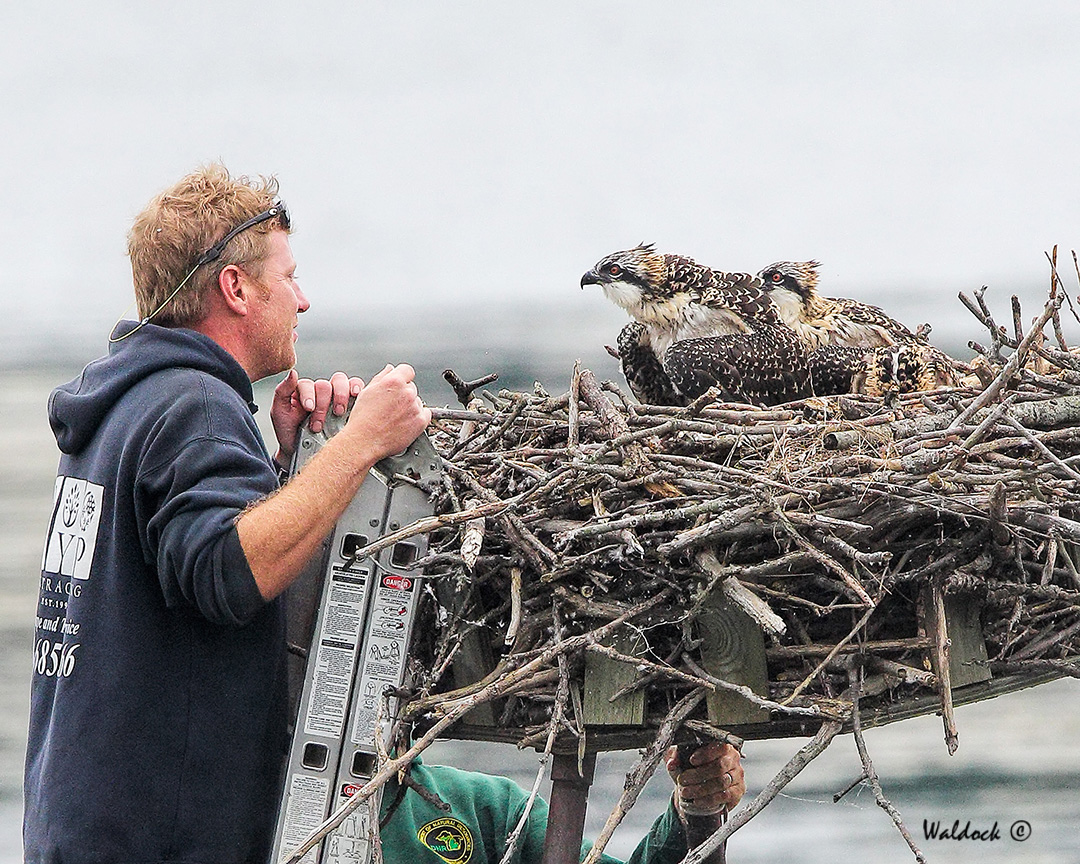 Every day, March through October, photographers of all ages, races and skill levels haul their cameras, tripods and folding chairs down to the shores of Wildwing Lake in Kensington Metropark.

“They call us the ‘Osprey Paparazzi’ because on any given day there’s anywhere from four to 25 of us down here taking pictures of the osprey. It’s a real passion for us,” said 75-year-old Jane Purslow, a cytotechnologist at Beaumont-Botsford Hospital who spends hours each day photographing these fish-eating birds of prey.

Ospreys are celebrities at this park just 20 miles east of Brighton. That’s because they’ve made a major comeback in the region after a significant population decline a half-century ago due to the use of DDT.

“They are truly a wildlife conservation success story,” said Barb Jensen, program coordinator for Michigan Osprey, whose volunteers have played a major role in teaming with the Michigan Department of Natural Resources and other partners in reintroducing the bird to the area.

In the southern half of Michigan’s Lower Peninsula, the goal in 1998 was to have at least 30 breeding pairs by 2020. It was surpassed nearly a decade earlier than expected, Jensen said. There are about 60 nests in the area now.

But because ospreys prefer nesting up high, too many birds are nesting on cellular and utility towers. The nests obstruct access to towers and lines.

That’s why man-made nesting platforms such as the one installed at Kensington Metropark are so important.

“We’re doing everything in our power to give them other areas that are advantageous to the kind of habitat they need to raise their young,” Jensen said.

Last fall, the Huron River Watershed Council, along with other public and private agencies, installed two more nesting platforms along the Huron River outside Ann Arbor in an effort to give osprey a safer place to call home.

"The osprey are a real symbol of improving water quality and a healthy ecosystem," said Laura Rubin, executive director of the Huron River Watershed Council.

When an osprey leaves Michigan in the fall, it’s got a long way to go to its winter home in South America. To better monitor their travels and understand the challenges they face, several osprey chicks are outfitted annually with “backpack” satellite telemetry units. The GPS units help scientists track the young birds’ daily movements and seasonal migration patterns.

Anyone can follow along and find out where the birds are at any time on Michigan Osprey’s website.

“Kids and their parents can follow the birds’ migration on their mobile devices,” Jensen said. “It’s one way we’re trying to create the next generation of conservationists.”

Like so much of the osprey reintroduction program, the tracking is made possible through a partnership between public and private agencies: Michigan Osprey, the state Department of Natural Resources, the U.S. Department of Agriculture-Wildlife Division and the Detroit Zoo.

Each osprey has a name that corresponds to the tracking ID and the location where it was tagged. The Osprey Paparazzi are on the lookout for the return of Kensington Kensie and Humphries DTE Ozzie, who were tagged with a transmitter in 2015 and 2014, respectively. Sightings of osprey in Southeast Michigan can be reported here to help further conservation projects and osprey population surveys.

Photographers are conservationists, too

At the restoration program at Kensington Metropark, the Osprey Paparazzi find themselves filming other wildlife and waterfowl throughout the park’s 4,481 sprawling acres of wooded, hilly terrain while awaiting the ospreys that should return any day from their South American winter migration.

“We’re all scared to death in the springtime because we’re just hoping the ospreys come back again,” said Lou Waldock, 62, a retired Livonia firefighter who visits Kensington daily to photograph the osprey, other wildlife and landscapes.

“It’s hard to describe how wonderful it is: We see them mating, building the nest, laying the eggs, the chicks hatching, and then them growing up and learning to fly,” Waldock said. “We’re like a bunch of expectant parents.”

The photographers take meticulous notes on the birds’ diet and activities to help safeguard against anything that might adversely affect their growth and safety. All the data are shared with Michigan Osprey.

Walkers, bicyclists, fishermen and schoolchildren are always curious to learn more about the ospreys when they see the paparazzi in action. And the Osprey Paparazzi are more than happy to chat about their favorite birds.

“We are so happy to be doing this,” Purslow said. “Conservation is so important; I want my grandkids to see these beautiful birds and to teach the kids to appreciate nature.”