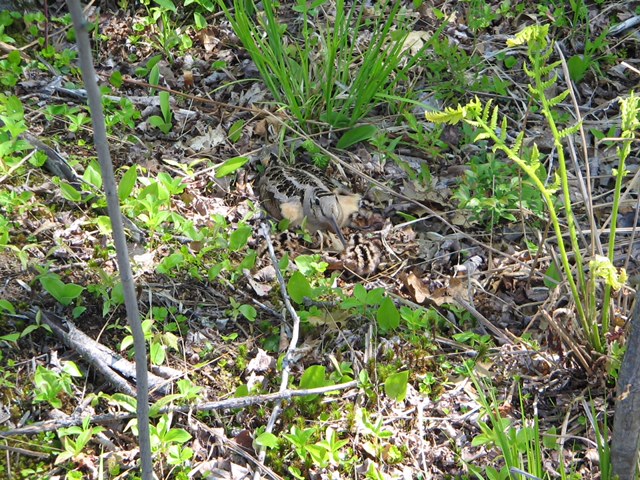 Now imagine trying to gently hold that tiny, squirming ball of fluff while placing a numbered aluminum ring around its little leg.

Biologists have successfully used this delicate process – known as bird banding – for more than a century to track the movement and habits of migratory birds such as ducks, geese, raptors, songbirds and woodcock.

“If we know where they lay their eggs, raise their young and live out their lives, then we can all work more effectively to provide the kind of habitat that will ensure these beautiful birds are here for future generations,” said Matt Pedigo of the Michigan Wildlife Council

Banding is considered a useful wildlife management tool because birds are so mobile, crossing states, continents and even hemispheres in their annual migrations.

Banded birds may be recovered in the future by biologists, the general public or hunters. When the numbered bands are reported to the National Bird Banding Laboratory  in Maryland, scientists can better understand their breeding and wintering distribution, behavior, migratory routes, and even survival and reproduction.

“With this data, we can plan our habitat conservation goals and set appropriate hunting regulations accordingly,” said Barb Avers, the waterfowl and wetland specialist for the Michigan Department of Natural Resources.

Labor of love for banders

The existence of this valuable banding data is a great example of the power of public and private wildlife management.

Agency personnel band the majority of waterfowl, while woodcock are banded primarily by trained volunteers. Without the help of dedicated woodcock banders – many of them volunteers such as 73-year-old Jerrie Schultz – none of this information would exist. The retired automotive engineer is gearing up for his 23rd season of banding woodcock.

“Banding is how I give back to the species as a hunter. I know the information I gather every spring helps scientists learn more about the bird and what it needs to thrive,” said Schultz, who lives in Frankenmuth.

The American woodcock is just one of the many migratory birds banded in Michigan. By keeping an eye on woodcock, whose favorite habitat is brushy, young aspen forests, wildlife experts can also gauge the welfare of other birds, animals and insects that share that habitat.

Although the woodcock population dropped in the 1960s, it’s now on the rebound.

“We believe a part of the comeback is thanks to the management work being done to maintain and establish young forests in Michigan,” said Al Stewart, DNR upland game bird specialist. “Young aspen forests are extremely important for many wildlife species.”

Banding data through the years show woodcock – sometimes known as the timberdoodle – nest in northern regions including Michigan, Wisconsin, Maine and Canada and then winter in Louisiana, Stewart said.

Thanks to data gathered from matchbox-sized satellite telemetry units attached to the back of nearly two dozen woodcock in the last two years, scientists are learning more details about the bird’s travels.

But for the most part, the majority of information still comes from leg-banding about 1,000 woodcock annually in Michigan.

“Michigan has banded about 38,000 woodcock since 1981, which is more than anywhere else in the world,” Stewart said. “Michigan is also No. 1 in the world for American woodcock harvest.”

Banders come from all walks of life across Michigan. They receive extensive classroom and hands-on training from the DNR so they know the best way to handle and band the birds, but also record all pertinent data.

“Our overriding concern is to never hurt the chicks or hens when we’re out in the woods banding,” said Schultz, who relies on his dogs, Belle and Sage, to help locate the camouflaged woodcock. Hens weigh about 7 ounces and usually lay four eggs.

The actual banding portion of the excursion takes only seconds and is painless for the birds.

“The reason we can put leg bands on woodcock chicks when they’re so young is they’re one of the rare birds whose feet and ankles are about the same size when they’re hatched as they’re going to be as adults,” Stewart said. “That’s why we band ducks and geese later in the summer, when they’re bigger.”

Once all the chicks are banded, Schultz creates a makeshift nest of leaves and grasses so they’ll be safe and sound when their mother returns.

Schultz spends about 20 days in April and May near Gladwin banding woodcock. In a good year, he can band 50 to 70 of them.

“If you’ve got four chicks scattering in four different directions, the chances of catching all four are probably just 50/50. Sometimes I’ll exhaust myself searching for that third or fourth chick,” he said. “But it’s worth it.”

Each year, wildlife biologists work to enhance the bird-banding system.

“Recently, we’ve really increased our banding efforts for ducks. In 2016, Michigan had a record year with the banding of 5,800 ducks and 4,000 Canada geese,” Avers said.

DNR staff band ducks each year in game areas and wildlife refuges. To increase numbers of ducks banded in the more populated southern Lower Peninsula, the DNR created a unique team of duck banders in 2014 to scout for sites with adequate mallard or wood duck numbers.

The duck-banding teams also interact frequently with the public in these areas, outreach that has left many with a better understanding and appreciation for migratory birds and how the DNR manages them.

As with so many other conservation programs in Michigan and across the nation, the protection of wildlife and their habitat is funded primarily by the purchase of hunting and fishing licenses.

Additionally, through the Federal Aid in Wildlife Restoration Act – also known as the Pittman-Robertson Act of 1937 – sportsmen and sportswomen nationwide have generated billions of dollars in excise tax dollars that are used to conserve critical wildlife habitat for all of us to enjoy," said Jeff Poet of the Michigan Wildlife Council.

In 2016, Michigan received over $22 million of those Pittman-Robertson funds from the U.S. Fish and Wildlife Service for restoration of wild birds and mammals and to acquire, develop and manage their habitats."

The Michigan Wildlife Council was established three years ago to build awareness about the importance of wildlife conservation and the way it’s funded as part of an effort to ensure Michigan’s outdoor resources are here for generations.

Spotting and reporting birds is a great way for the public to get involved.

Wildlife professionals place several types of bands on wild birds in North America. Each type is made in many sizes to accommodate the tiniest hummingbird to the largest trumpeter swan.

Anyone who finds or harvests a banded bird is asked to report it to the U.S. Fish and Wildlife Service or by calling 800-327-BAND (2263). You’ll need the band number, as well as where, when and how you recovered the bird.

The U.S. Geological Survey’s Bird Banding Lab will upload the information to its database and then send you a certificate of appreciation that includes information about the sex, age and species of the bird, and where and when it was banded.