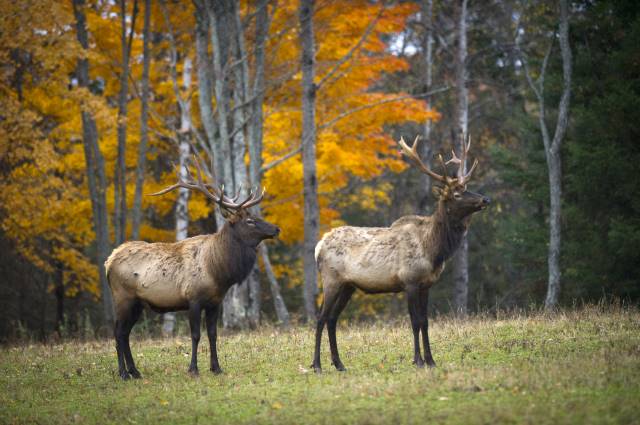 They may be one of Michigan’s best-kept secrets.

“Elk are such magnificent animals. But most people have no idea we have them right here in Michigan on public land so anyone can go see them,” said Drew YoungDyke, editor of Michigan Out-of-Doors magazine.

Michigan’s wild elk herd is just four hours north of Detroit in the 105,000-acre Pigeon River Country State Forest near Gaylord. In total, wildlife experts estimate over 1,000 elk live in and around this enormous state forest.

From the start, it’s been a rough road for elk, which disappeared from Michigan in the late 1800s.

But when the conservation movement began picking up steam in the early 20th century, hunting and fishing regulations were carefully established to ensure that wildlife populations didn’t grow too small or too large.

Then in 1937, a national coalition of conservationists – virtually all of them hunters – persuaded Congress to direct the revenue from an excise tax on hunting arms and ammunition into a special fund for distribution to the states for wildlife restoration.

Known as the Pittman-Robertson Act of 1937, those taxes have generated billions of dollars for wildlife management across the nation.

“We, as hunters, provide the lion’s share of funding for conservation efforts,” said Jeff Van Buren, regional director of The Rocky Mountain Elk Foundation. “We do this to ensure the future of elk, other wildlife, their habitat and our hunting heritage.”

Today’s Michigan herd dates to 1918, when seven Rocky Mountain elk were relocated to the Gaylord area from western areas of the United States. After growing steadily to about 1,500 elk in the early 1960s, their numbers plummeted to only 200 in the mid-1970s due to poaching and reduced habitat quality.

Thanks to extensive public and private wildlife management in the last four decades, an aerial survey in early 2016 found an estimated population of more than 1,300 animals – well above the Michigan Department of Natural Resources’ population goal of 500 to 900.

“Our elk numbers in Michigan are at some of the highest levels we’ve experienced in history,” said Chad Stewart, DNR deer, elk and moose management specialist.

The Pigeon River Country State Forest is a great location to find elk because it is the  ideal mix of managed open areas and forest. Intense land management from cutting timber, planting crops and prescribed burning has resulted in a robust and sustainable herd, said DNR biologists.

In 2018, the DNR and its partner agencies will celebrate the 100th anniversary of the elk’s reintroduction to Michigan. Celebration details are still in the planning stages, Stewart said.

The DNR and partners such as the Rocky Mountain Elk Foundation and the Michigan United Conservation Clubs. work diligently to manage elk habitat, as well as viewing areas for the public.

Sportsmen play a primary role in maintaining the balance between elk numbers and habitat. In fact, their activities have a direct impact on the health of all of our state’s abundant wildlife and natural resources. Not only do hunting and fishing license fees pay for species conservation and wildlife reintroduction programs, but they are also used to stock lakes with fish and preserve Michigan’s forests, lands and river quality.

And since wildlife is a renewable natural resource that is often at a surplus, regulated hunting and fishing help keep populations in healthy balance with their habitats.

Keeping the elk herd at a manageable level and contained for the most part within the Pigeon River Country State Forest helps alleviate crop damage concerns among farmers.

Elk hunting has occurred annually since 1984. Between 30,000 and 40,000 people apply for a chance to hunt elk every year. But the number of licenses issued generally ranges from only 100 to 400, depending on the herd’s size.

“But we manage elk primarily for viewing, not for hunting. Hunting is really just a method of controlling the population,” said Brian Mastenbrook, a DNR wildlife field operations manager.

Thousands of nature lovers visit nearby communities such as Gaylord and Atlanta on their way to elk-viewing hot spots.

Probably the most popular time to view elk is September and October, when bulls are establishing dominance for mating rights with the cows. Bulls make loud noises (known as bugling) and break brush with their antlers to impress cows and intimidate their rivals.

“And when you hear one bugle the first time, it raises the hair on the back of your neck. It’s a really cool sound,” Mastenbrook said.

Most viewing locations are accessible by road, but some may require a hike. The official viewing sites are marked by the DNR, although elk range far and wide in the area and may not always be present.

These efforts help not only elk, but also other species such as deer, black bear, grouse and warblers.

“Elk are just one piece of the pie,” Mastenbrook said. “We’ve got other species that benefit directly from these management methods in forests and open areas.”

Since the Michigan chapter of the Rocky Mountain Elk Foundation was created in 1984, its 6,200 members have completed 149 conservation projects here valued at $5.3 million, Van Buren said. The group has protected or enhanced more than 5,600 acres of habitat and secured public access to 943 acres.

It’s now in the midst of a campaign to increase public knowledge about how wildlife and Michigan’s outdoors are managed and funded, and the role sportsmen and sportswomen play in preserving Michigan’s outdoor heritage for future generations.

“By protecting, maintaining and restoring Michigan’s wildlife, we are ensuring these treasures are here for generations,” said the council’s Matt Pedigo.

Height: 4 to 5 feet at the shoulder

Winter Coat: Head, neck and legs are dark brown, while the sides and backs are much lighter

Antlers: Grow annually on male elk up to 40 pounds in weight

Young: Calves born late May to early June; 25 to 30 pounds