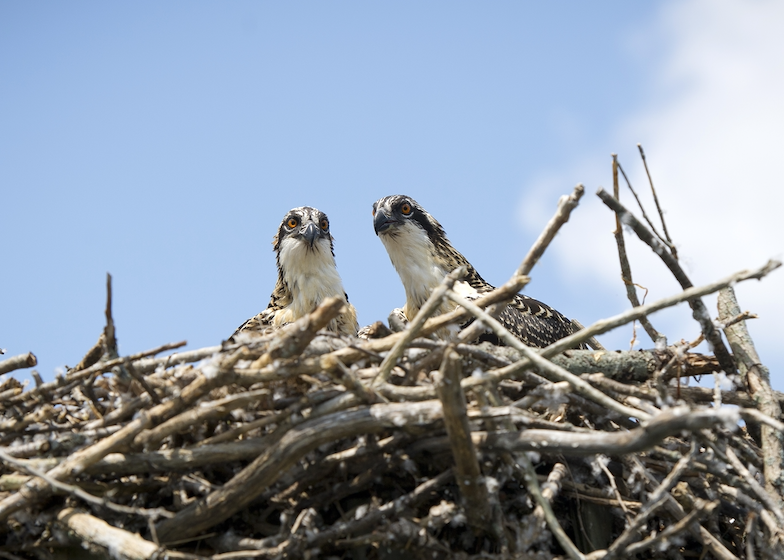 Thanks to efforts to reintroduce the osprey to southern Michigan, the once struggling species is now thriving in urban areas. In fact, a reintroduction program launched about 20 years ago soared past the goal of having at least 30 pairs of nesting ospreys in Southeast Michigan by 2020 nearly a decade ago.

Today, more than 250 nests are found statewide, and osprey reintroduction efforts are expanding throughout the southern half of the Lower Peninsula.

One osprey hot spot is the Pointe Mouillee State Game Area, a 4,000-acre wetlands area on Lake Erie in Monroe County. There, the Michigan Department of Natural Resources uses funds generated through the sale of hunting and fishing licenses and related equipment purchases to create and maintain habitat for ospreys and scores of other wildlife species.

“The rebound in the state’s osprey population is yet another example of how wildlife management practices – the bulk of which are funded by hunting and fishing – are crucial to conserving our precious outdoor resources for generations to come,” said Matt Pedigo, chair of the Michigan Wildlife Council.

Ospreys are fish-eating raptors that can grow to nearly 2 feet long with wingspans reaching five feet in length. But they were no match for pesticides such as DDT and wetland habitat destruction that decimated their numbers in the 1960s.

Although their reproduction rates increased after DDT was banned nationwide in 1972, it was the reintroduction program administered by the DNR with assistance from other organizations and resident volunteers that truly brought them back in Michigan.

In 1998, DNR began to relocate ospreys to southern Michigan. The program, supported by donations to Michigan's Nongame Wildlife Fund, removed chicks from active nests in northern Michigan and reared them in man-made towers in southern Michigan, a process called “hacking.”

Relocation efforts occurred over a span of 10 years. In 2018, the DNR, along with volunteers from Michigan Osprey, identified at least 85 active nests in southern Michigan – a substantial increase from the single active nest reported in 2002.

Also important are the “backpack” satellite telemetry units that are attached to several osprey chicks each year. Those – along with the eyes and ears of volunteers, including members of Michigan Osprey – help the DNR track the birds’ whereabouts.

Anyone can follow along and find out where the birds are at any time on Michigan Osprey’s website.

Individuals and public and private groups have also teamed to install nesting platforms in osprey habitat. And now the Michigan DNR is welcoming citizen scientists to help monitor the bird of prey’s growing numbers.

“Like a lot of wildlife management that takes place statewide, the osprey’s comeback in southern Michigan really was a team effort conducted by people who share a love of Michigan’s outdoors,” Pedigo said.