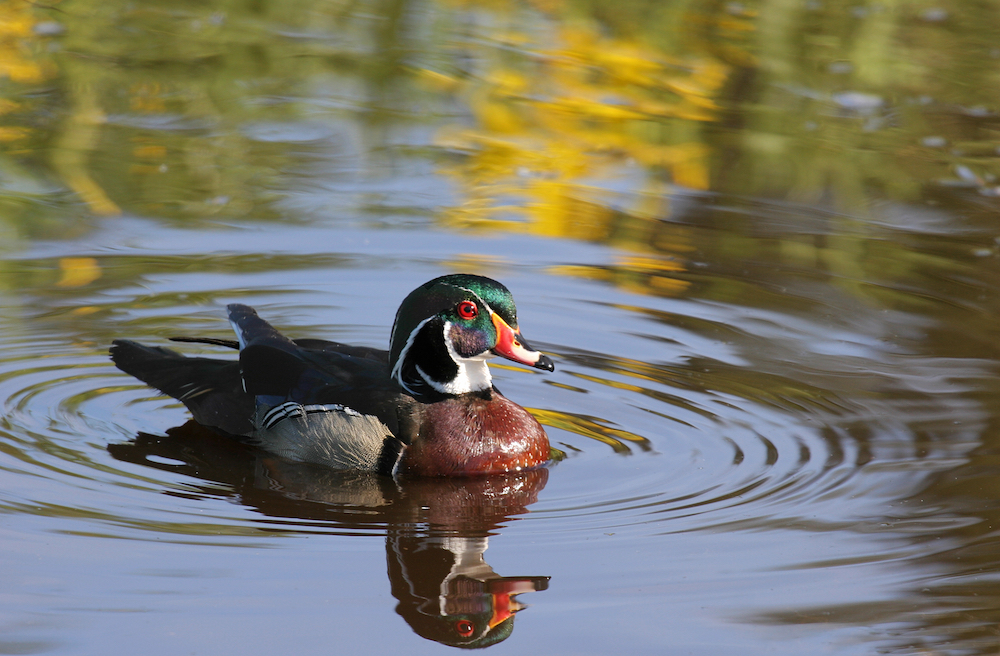 But you won’t catch this Michigan native flashing its feathers in a tropical forest or duckwalking down the Vegas strip — it’s perfectly at home patrolling the waters of one of the state’s many wetlands.

“Wood ducks are really pretty shy,” said Barbara Avers, a waterfowl and wetland specialist for the Michigan Department of Natural Resources. “Unless you’re looking for one, they’re not easy to find. Those vivid colors are actually great camouflage for them. They allow wood ducks to blend in quite well with the reflections off water and the overhanging branches in their natural habitat.”

But while those colorful feathers may help the wood duck hide out among Michigan’s waterways, at the turn of the 20th century they played a key role in endangering this royal-looking waterfowl.

In the late 1800s and early 1900s, Michigan’s population was exploding, and many of the state’s wetlands — the wood duck’s natural habitat — were being drained to better accommodate human activities. Michigan forests were also being clear-cut, which negatively affected wood ducks, as they require mature forests for nesting.

“Wood ducks build their nests in the cavities of trees, and cavities that big don’t exist in young trees,” Avers said. “By the early 20th century, most of Michigan’s older forests were gone.”

At the same time, the wood duck’s swoopy, tricolored crest feathers and iridescent body plumage were much sought after by women’s hat makers, who began to harvest the ducks commercially.

“Commercial harvesting and loss of habitat contributed to the wood ducks being almost completely wiped out in Michigan and around the country,” Avers said. “But hunters were some of the first to see what was happening. They stepped up and said we needed to do something to preserve wood ducks for the long run.”

Thanks to the work of the nation’s hunters and early conservationists, the U.S. Migratory Bird Treaty Act was enacted in 1918 eliminating commercial harvest and instituting hunting limits to maintain healthy populations. Rehabilitation work also began to replenish some of the species’ habitats across the state, so that today Michigan’s wood duck population is considered healthy and thriving.

“Wood ducks are an incredible conservation success story, and they show just how much hunting and fishing benefits Michigan wildlife,” said Matt Pedigo, chair of the Michigan Wildlife Council. “And that work continues today, as Michigan’s conservation work is funded by dollars that come directly from fishing and hunting licenses — not from state taxes.”

The Michigan Wildlife Council is devoted to increasing public knowledge on the importance of wildlife conservation and the crucial role hunting and fishing play in managing and maintaining Michigan’s abundant wildlife and natural resources.

By the 1930s, Michigan conservationists had figured out a method of creating artificial homes for ducks while wetland forests were growing back. These came to be known as wood duck boxes, and they are still widely used today. They consist of a wooden container about the size of a large suitcase with a hole cut out near the top.

Wood duck box instructions are found online. They’re popular projects for elementary school classrooms and Scout troops. Best of all, people do not necessarily need to live in a wetland area to get the attention of a wood duck — they’re willing to fly up to a mile from a water source to build their nests.

“Making a wood duck box is something just about anyone can do to attract a nesting wood duck hen to their property as long as there are wetlands nearby,” Avers said. “They’re not as necessary as they once were, but it’s still a neat way for people in Michigan’s suburban and even urban areas to connect with this beautiful bird.”

Avers said Michigan’s wood duck population is “robust and stable,” with an estimated population of about 100,000. By comparison, Michigan is home to about 200,000 mallard ducks, the type most people are familiar with.

Duck to the future

Today, there are enough mature forests to sustain Michigan’s wood duck nesting areas, but conserving state wetlands remains an issue because that is where wood ducks spend most of their time feeding on aquatic plants, seeds, acorns, insects and other invertebrates.

Ducks Unlimited is an international nonprofit dedicated to the conservation of wetland and upland habitats that benefit both humans and wildlife. And in Michigan, that work to date has contributed to restoration of more than 80,000 acres of wetlands. Ducks Unlimited works in tandem with the Michigan DNR to ensure wood ducks and other waterfowl have a bright future.

“Our mission is to protect habitats and return them to their natural wetland state, if we can,” said Chris Sebastian, a spokesman for Ducks Unlimited’s Great Lakes/Atlantic Region. “The DNR is a valuable partner to conserve these habitats. All across the state, ducks need those habitats, and thanks to that work, Michigan wood ducks will have healthier forests and better wetlands for the foreseeable future.

“We all want the same thing — for these animals to thrive and these habitats to remain healthy,” Sebastian said. “The conservation work that’s able to be done thanks to hunting and fishing license dollars is incredible. And because of that work, wood ducks have the opportunity to exist for generations to come.”