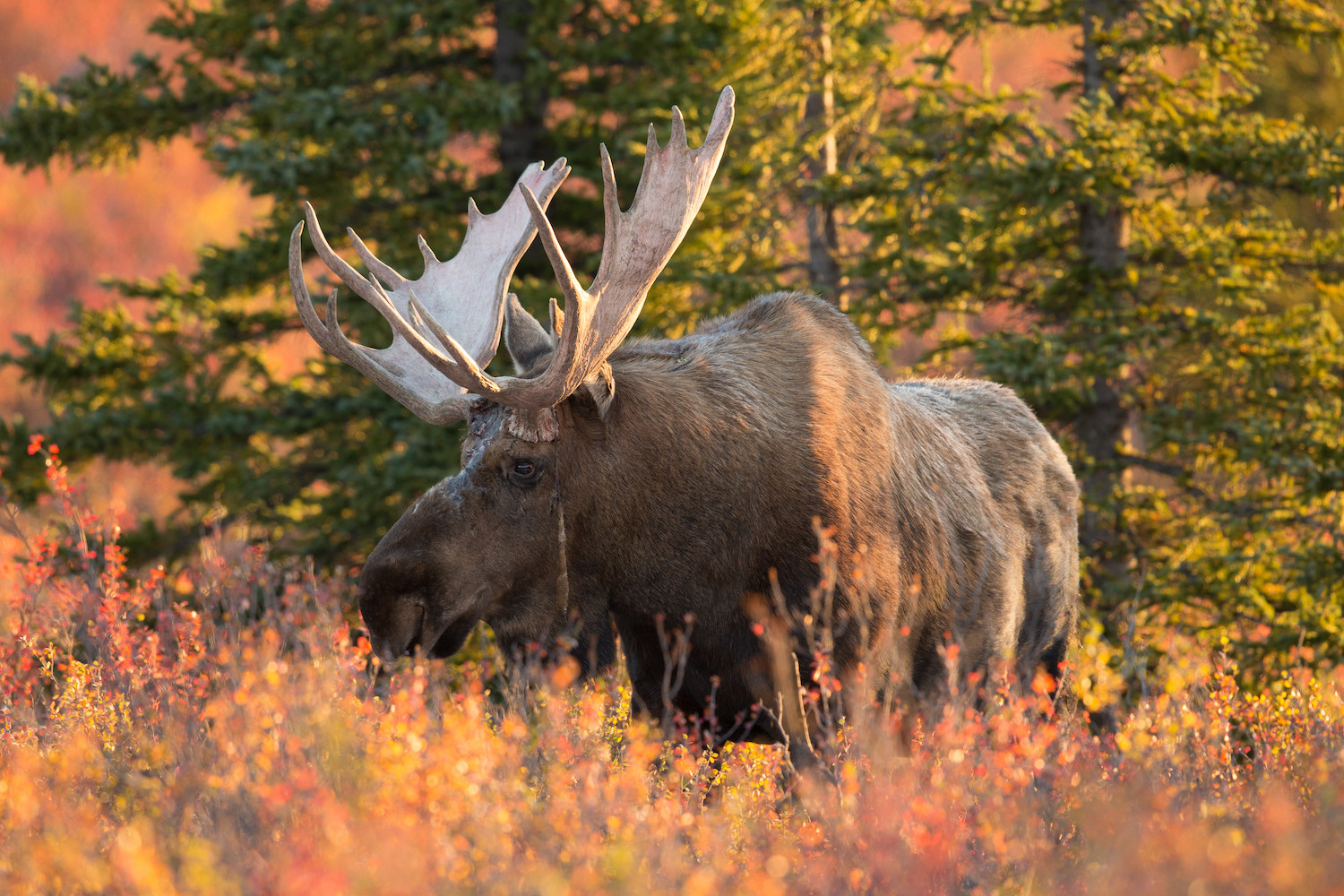 How do you get a half-ton moose from Ontario to Michigan?

All it takes is a helicopter, a sturdy sling, a big blindfold, earplugs, an international team of wildlife biologists and veterinarians, a 600-mile overnight truck ride, and a verdant new home in the Upper Peninsula where the plant-eating giants can dine and reproduce to their hearts’ content.

Now, nearly 35 years since the “Michigan Moose Lift” — when a total of 59 animals were individually airlifted by helicopter from Algonquin Provincial Park in Ontario and trucked to a new range west of Marquette — Michigan’s moose population is still holding its own.

“We estimate the relocated herd at 509 animals in a core area that includes parts of Marquette, Baraga and Iron counties,” said Dean Beyer Jr., a wildlife research biologist with the Michigan Department of Natural Resources. “While growth has slowed considerably in recent years, we believe the herd is stable and actually increasing in numbers about 2% annually.”

Moose have had a rocky road in the Great Lakes State

By the late 1800s, the majestic, half-ton animals disappeared from Michigan’s Lower Peninsula and only a handful remained scattered across the Upper Peninsula. Many factors contributed to their decline, including extensive logging leading to habitat loss, a fatal parasite called brainworm and unregulated hunting.

But Michigan didn’t give up.

Efforts to restore the herd began more than a century ago. Moose were given complete protection in 1889. In the 1930s, state conservation officials transported 63 animals to the Upper Peninsula, but the animals failed to gain a foothold.

The goal of the 1985 and 1987 moose reintroduction from Canada was to produce a self-sustaining herd in the Upper Peninsula. Their numbers have grown thanks to a combination of the relocation, an abundance of suitable habitat and protection.

“Not all reintroductions work … but this one did,” Beyer said. “Michigan’s moose herd is self-sustaining, and that’s a big, big win.”

A lot of hard work takes place every day from public and private groups, to scientists and volunteers to ensure that Michigan’s wildlife and natural resources continue to thrive.

The Michigan Wildlife Council was established in 2013 to educate the public about the importance of wildlife conservation and the vital role hunting and fishing play in that work. In Michigan, fishing and hunting license sales generate more than $61 million per year for wildlife management and natural resource conservation projects.

“The rebound of our moose population is yet another example of how wildlife management practices are crucial to conserving our precious outdoor resources for generations to come,” said Matt Pedigo, chair of the Michigan Wildlife Council.

“Michigan is committed to conserving habitat for wildlife, helping to protect and enhance the species that are part of our outdoor heritage.”

In order to manage the moose herd, the DNR in 1997 began conducting an aerial survey once every other year during the winter months, when the animals are easier to see with bare trees and snow on the ground. The survey involves flying systematically at a low altitude over parts of Marquette, Baraga and Iron counties and recording how many moose are seen. The survey helps wildlife biologists monitor population growth and assess management successes or potential concerns. The most recent survey occurred in 2019.

In addition to the western Upper Peninsula, moose can be found in two other Michigan regions.

A smaller population in the eastern Upper Peninsula is spread across portions of Alger, Schoolcraft, Luce and Chippewa counties and is estimated to contain fewer than 100 moose. A second herd is found on Isle Royale, a Lake Superior island northwest of Copper Harbor.

The 45-mile-long island is designated as a national park and managed by the National Park Service. More than 2,000 moose — too many for such a small range — roam the small island due in large part to a nearly nonexistent wolf population.

To stem the growing tide of moose, Isle Royale National Park is in the midst of transporting between 20 and 30 new wolves to the island to act as predators and bring the moose population back to reasonable numbers, said Isle Royale Park Superintendent Phyllis Green.

Where can you see moose?

While adult moose stand 6 feet at the shoulder, they aren’t easy for visitors to find.

Adults are mostly solitary animals. Breeding begins in early September after a bull’s massive antlers are done growing. This period, known as rut, peaks in late September and early October. Bulls usually drop their antlers by early January, but some retain them until late February.

Along with their large bodies, moose have large appetites. During the summer, adults can eat up to 60 pounds of food per day, often wandering remote wetlands in search of water lilies, pond weeds and leaves, and twigs of aspen, dogwood, willow and maple trees. During the winter, moose may eat 20% less, switching their diets to balsam fir, hemlock and twigs of other trees and shrubs.

Because moose are unpredictable and aggressive, they should not be approached. Suggested viewing routes are often seasonal roads that can become impassable at any time of year.

The DNR suggests these tips for viewing moose: