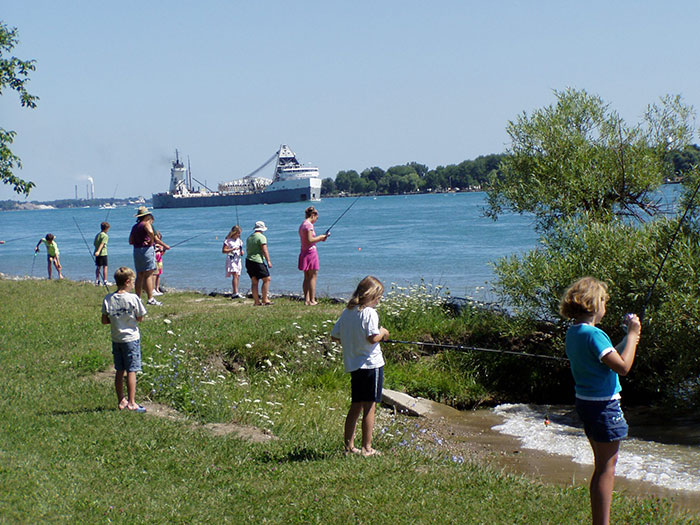 Many metro Detroiters may know Algonac State Park for its camping, picnicking and freighter-viewing opportunities, but it is also home to several small patches of land – collectively just over 90 football fields – consisting of a rare ecosystem. The park’s wild prairie and savanna are nearly all that remains of more than a half-million acres that once blanketed most of southeast Michigan.

At least 24 rare species of plants and animals, including purple milkweed, the spotted turtle and the eastern fox snake, live within Algonac State Park – one of the highest concentrations of rare species found today in any Michigan state park.

That’s why intensive plant and wildlife management is constantly taking place at Algonac to protect the more than 550 species that call the area home.

“Every day, great strides are being made to ensure that Michigan’s wonderful natural resources are here for generations to come,” said Matt Pedigo, chair of the Michigan Wildlife Council, which was created to increase the public’s understanding about how Michigan’s outdoors and wildlife are managed and funded.

To preserve this piece of Michigan’s history for future generations, the state dedicated 1,244 acres of Algonac State Park just south of St. Clair as a protected natural area in 2008.

“This is part of Michigan’s natural heritage,” Fahlsing said. “We’re not trying to go back to another point in time. But we believe there should at least be some places that remain as they once were before it became all farm fields and suburbs.”

A landscape carved by glaciers

Prairies are treeless areas covered by tall grasses and wildflowers, while savannas are areas of widely spaced trees with grasses, wildflowers and shrubs growing underneath.

In southeast Michigan, lakeplain prairies and savannas grow in the clay soils that were the bottoms of the large lakes that once covered the area. These lakes were created by melting glaciers and were precursors to the Great Lakes.

Prior to European settlement, lakeplain prairies and savannas covered 600,000 acres of southeast Michigan. But after more than two centuries of logging, farming, drainage and urban development, only 500 acres of Michigan’s native land cover remain throughout the state, including the 150 acres located at Algonac State Park.

Now, thanks to ecological restoration programs at Algonac, conservationists are beginning to see a slight increase in the quantity and quality of these remaining patches.

“We’ve done a lot of invasive species control on phragmites and glossy buckthorn, which crowd out natural species,” Fahlsing said. “We also conduct prescribed burns to mimic the natural fires that would normally take place and that remove invaders that don’t belong there.”

In addition, seeds are harvested from native species and later planted to expand the existing prairie.

“Park visitors are constantly amazed by the natural beauty at Algonac,” Fahlsing said. “When you walk along the mowed path called the Blazing Star Prairie Trail it’s a sea of pink wildflowers this time of year. If you come back a few weeks later, it’s transformed into a whole host of yellows with native sunflowers and coreopsis.

Unlike a museum, where treasures may be hidden away, all of this living history is available for the public to see and experience.

Park visitors are encouraged to meander along the 2.5-mile Oak Savanna Trail or the half-mile Blazing Star Prairie Trail to take in the incredible views of grasses, wildflowers, birds, deer and butterflies.

“Algonac State Park has a really unique set of natural communities and it’s near Metro Detroit,” Fahlsing said. “These are very beautiful places and I think future generations will be glad we saved it.”