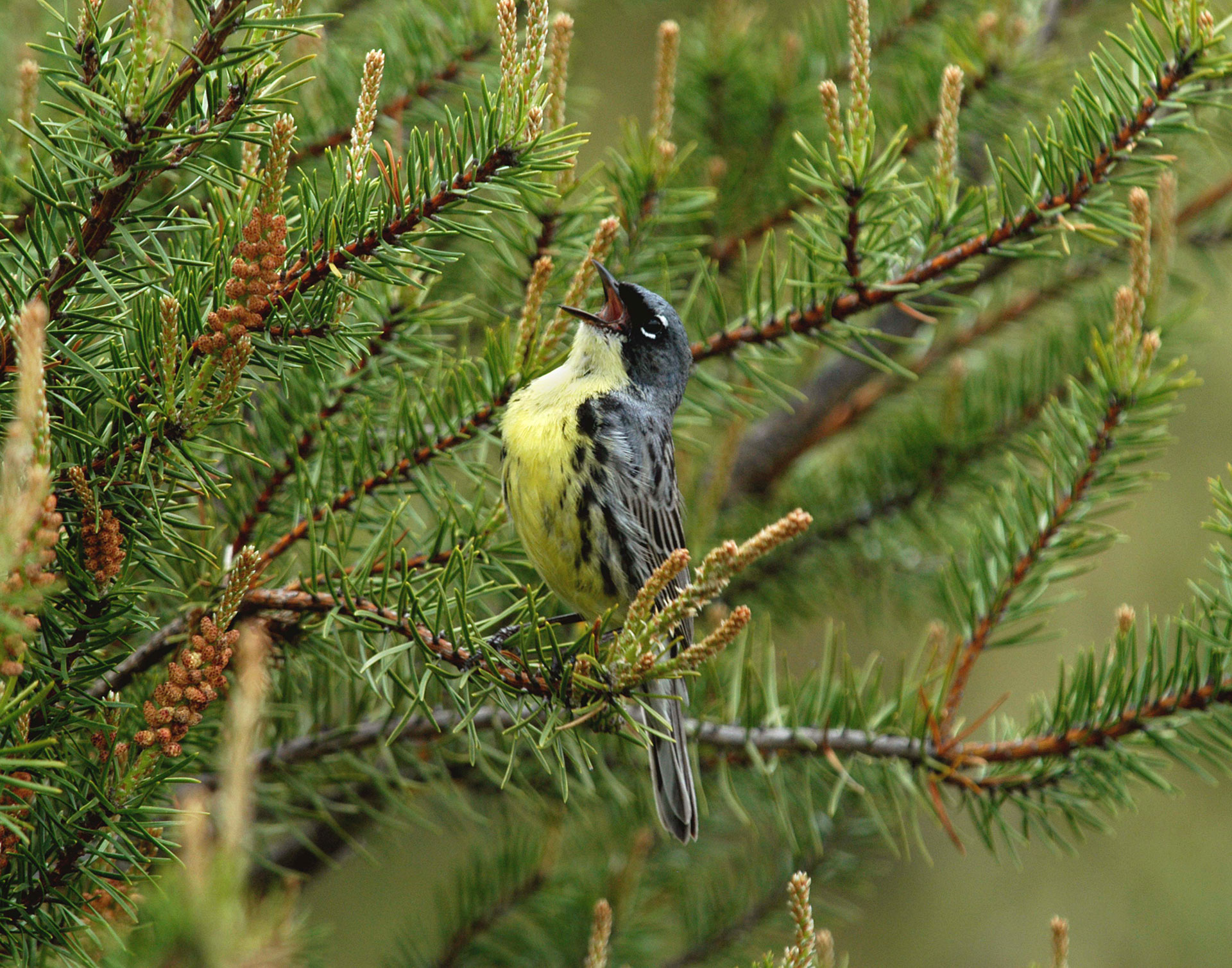 Karen Markey has been covered in ticks. She’s fallen flat on her face. She’s gotten lost in the middle of the northern Michigan woods.

But there’s nowhere else she would rather be.

“Nothing is more satisfying than getting out in that jack pine forest and hearing a Kirtland’s warbler in the distance. It’s Pure Michigan,” said Markey, a University of Michigan professor who volunteers each June in the Kirtland’s warbler census.

About 95 percent of all Kirtland’s warblers on Earth nest in the northeastern Lower Peninsula near Mio. Nearly extinct 50 years ago, the Kirtland’s warbler was one of the first species protected under the Endangered Species Act of 1973. Today it’s considered a conservation success story.

“Its population has increased from about 200 pairs in the early 1970s to more than 2,000 pairs now. That’s double our recovery goal,” said Philip Huber, a U.S. Forest Service biologist.

That recovery is thanks to more than 40 years of on-the-ground habitat projects by the U.S. Forest Service, U.S. Fish and Wildlife Service, Michigan State Department of Natural Resources, environmental agencies in Canada and the Bahamas, and numerous volunteer groups.

“Without intervention and land management efforts, the Kirtland’s warbler would most likely be extinct now,” said Chris Mensing, a U.S. Fish and Wildlife Service biologist.

The survival of the Kirtland’s warbler is intimately tied to jack pine forests – beneath the cover of a jack pine is the only place where the rare songbird will nest. Jack pine is a relatively small pine tree that is native to areas of Canada and the Great Lakes region. But just as the bird requires jack pine, jack pines require fire to regenerate.

Each year, the U.S. Forest Service and its partners help Mother Nature along not only by harvesting older jack pines and planting new seedlings, but also by sometimes conducting controlled burns to release the jack pine seeds.

In addition to releasing the seeds, fire reduces competition from neighboring plants and trees. Modern fire suppression, however, substantially decreased the frequency and size of wildfires, restricting the breeding habitat naturally produced for the songbird.

The habitat management has been wildly successful, according to the annual Kirtland’s warbler census.

Forest Service biologists and volunteers such as Markey make the trek to the Huron-Manistee National Forests each June to count singing males to monitor changes in the population, determine where the birds are nesting to protect them during breeding season, and to measure the effectiveness of habitat management.

The census is a count of singing males. Each morning for a week, biologists and volunteers walk two-mile-long paths through young jack pines listening for singing males. The locations of the males are plotted on maps. All singing males are then counted to come up with a total, since each male is presumed to have a female mate.

“By working together for nearly five decades and successfully managing the species, the U.S. Fish and Wildlife Service is considering down-listing the Kirtland’s warbler from an endangered species to a threatened species. That is an amazing feat,” said Carol Rose of the Michigan Wildlife Council.

“The number of diverse species that call Michigan home is truly remarkable,” Rose said. “By protecting and restoring wildlife like the Kirtland’s warbler, the quality of life in Michigan continues to be one of the best in the nation.”

Since the Kirtland’s warbler’s habitat, jack pine forests, cover much of northern Michigan, it is important to note that these wildlife management efforts help not only the Kirtland’s warbler, but also other species such as rabbits, snowshoe hare, white-tailed deer, woodcock, ruffed grouse and other game and non-game species.

A comeback to celebrate

Once jack pine stands are about 20 years old, they offer less foliage and the protection the warbler needs to hide its nest, so the birds must find a younger tree stand. When the trees are about 50 years old, the timber is harvested and sold for human use. Then more trees must be established.

“As land managers, we’re fortunate that we can harvest a timber product off that landscape for human use. We can plant new trees for an endangered bird like the Kirtland’s warbler and then harvest those trees again in 50 to 60 years,” said Huber, who has spent more than a quarter century working to reestablish the songbird.

Additional research is now taking place to learn more about the bird once it leaves its nesting area in late summer or early fall.

“Remarkably, these tiny birds that weigh about 5 ounces fly about 1,500 miles to the Bahamas and spend their winters there. Then they return in May, most often to northeastern Lower Peninsula, but also in much smaller numbers to the Upper Peninsula, Wisconsin and Ontario,” Huber said.

Experience it for yourself

Guided tours are the best chance to view this endangered songbird. Kirtland’s warbler nesting areas in northern Michigan will be closed and posted against public entry during the nesting season.

U.S. Forest Service and Michigan Audubon Society tours are available in May in two areas:

U of M professor Karen Markey said that despite the difficulties she may encounter, she looks forward to taking part this June in her 16th Kirtland’s warbler census.

“Sometimes you’re waddling through the forest under branches and saying to yourself, ‘Why am I doing this?’ But I love doing it because I know I’m helping save this bird for every person who lives in Michigan.”